The prices of gold and silver tumbled down again for the third consecutive day. The recent U.S reports showed signs of progress. U.S GDP growth rate was revised up to 3.1%; Philly Fed index bounced back in the December survey; jobless claims increased by 17k to reach 361k. These reports, expect the jobless claims report, may have pulled down the prices of gold and silver. Further, the low trading volume may have also been among the reasons for the sharp rise in volatility. Will precious metals further decline today? Currently the prices of gold and silver are rising. On today’s agenda: Great Britain Current Account, Great Britain Net borrowing, GB revised GDP Q3 2012, Canada’s CPI, Canada’s GDP by Industry, U.S Core Durable Goods and  U.S Personal Spending.

Here is a short outlook for precious metals for Friday, December 21st:

In the chart below are the changes in the normalized prices of precious metals during December (normalized to 100 as of November 30th). During recent days, the price of silver and gold had a steep downward trend.

The ratio between the two precious metals sharply increased again on Thursday to 55.54. During December, the ratio rose by 7.79% as gold out-performed silver. 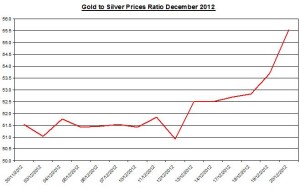 Great Britain Current Account: This will report will present  recent shift in the balance of payment of Great Britain; in the previous report the current account balance reached -20.8 billion pound; this report may affect the GBP/USD currency pair;

Great Britain Net borrowing: this report will refer to the monthly changes in the public sector net borrowing for October 2012; as of September 2012, the net borrowing reached £6.5 billion;

GB revised GDP Q3 2012: This will the final projection for the quarterly growth rate of the British economy during the third quarter; according to the previous estimate the third quarter grew by 1%;

Canada’s CPI: This report will refer to the CPI and core consumer price index (controlling the volatile components such as energy, fruit and vegetables) for November 2012. According to the Canadian CPI report for October 2012, the core CPI rose by 0.3% during the month – this is a slightly higher rate than in September. This report might affect the Canadian dollar, which is also strongly linked with commodities rates;

Canada’s GDP by Industry: In the recent report regarding September, the real gross domestic product edged up again by 0.1%. This report may affect the strength of the Canadian dollar currency, which is strongly correlated with gold and silver;

U.S Core Durable Goods: This report may indirectly indicate the developments in U.S. demand for commodities such as oil. As of October, new orders of manufactured durable goods rose to $216.9 billion; if this report will show a gain in new orders then it could pull up US dollar;

U.S Personal Spending: this monthly update refers to the changes in income and outlays in the U.S during November; in the last report regarding October the personal income fell by 0.2%.

The Euro/ USD edged up on Thursday by 0.11% to 1.3242. During the month, the Euro/USD increased by 1.97%. Moreover, several currencies such as Aussie dollar also slightly appreciated yesterday against the USD by 0.02%. The correlations among gold, Euro and Aussie dollar have weakened during the month: during the past several weeks, the linear correlation between gold and Euro /USD declined to 0.08 (daily percent changes); the linear correlation between the silver and USD/ CAD was 0.3 (daily percent changes). This weak correlation might suggest the daily shifts in precious metals didn’t coincide with the changes in major currencies market. Nonetheless, if the Euro and other risk currencies will rally against the USD, they are likely to pull up bullion rates.

Current Gold and Silver Rates as of December 21st

The prices of gold and silver sharply fell yesterday. The recent positive news of the progress of the U.S economy may have contributed to the fall in bullion rates, considering that precious metals are considered a safe haven investment. According to the CME, total market volume for gold and silver was still relatively low. If the volume will remain low, it could raise the chances of sudden sharp changes in gold and silver prices. In the meantime, there might be a correction for the sharp fall in gold and silver but these metals will remain well below their rate from the beginning of the week. The budget talks in Congress are still in progress with no end in sight. These talks are keeping the uncertainty around the future development of the U.S economy and. The recent update on this front is that Boehner is trying to have the Senate voting for his “Plan B” in which, among other, the government will only raise taxes on households earning over $1 million per year. The upcoming reports including: Great Britain Current Account and net borrowing reports, Canada’s CPI and GDP updates, and U.S core durable goods could affect the British Pound, Canadian dollar and USD, respectively.  If these reports will be positive and show progress they could help rally these currencies and thus may also affect precious metals. Finally, if the Euro and other “risk currencies” will rise against the USD, they are likely to pull up precious metals.