The prices of gold and silver changed direction again and bounced back on Thursday along with other commodities prices including crude oil and natural gas.  Yesterday, U.S jobless claims update came out: number of jobless claims declined by 8k to reach 363k. This news may have contributed to the strengthening of the USD.  The American trade balance deficit declined – exports of goods rose by a larger rate than imports had during September. This news was also a positive signs for the progress of the U.S economy and may have helped pull up commodities prices. Nonetheless, there are still concerns in regards to the “fiscal cliff”. In Europe MPC and ECB kept their respective short term rate unchanged. On today’s agenda: UoM Consumer Sentiment,  China Industrial Production,  and China’s Trade Balance

Here is a short outlook for precious metals for Friday, November 9th:

As seen below, the chart shows the changes in the normalized prices of precious metals during recent weeks (normalized to 100 as of October 19th). During November, both gold and silver slightly declined. 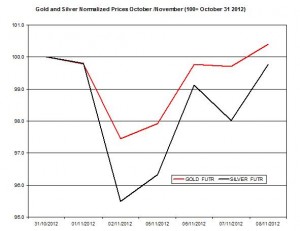 The ratio between the two precious metals also changed direction and slipped on Thursday to 53.54. During the month, the ratio rose by 0.64% as gold slightly out-performed silver. 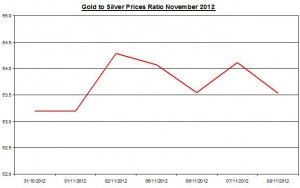 China Industrial Production: in the previous report about September the index rose to 9.2%; if the index will continue to rise, it could indicate the Chinese economic activity is expanding;

UoM Consumer Sentiment (preliminary): University of Michigan will publish its preliminary consumer sentiment report; this survey could offer another insight to recent developments in U.S consumers’ sentiment regarding the economy; last time the sentiment index rose again to 83.1;

China’s Trade Balance: as of the previous monthly report, China’s trade balance increased to a $27.7 billion surplus; if the surplus will further expand, it could indicate that China’s economic growth is increasing and thus may positively affect prices of precious metals. 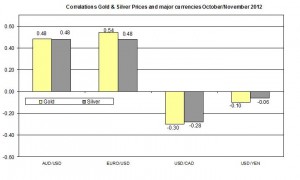 Current Gold and Silver Rates as of November 9th

The prices of bullion changed direction again and bounced back on Thursday. The volatility of the precious metals prices seem to have settled after the sharp shifts during the beginning of the week. IN Europe there weren’t any big changes as the ECB and MPC left their respective rate flat. The recent rally of the USD may have curbed the rally of bullion rates. The upcoming U.S financial report to be published today including UoM Consumer Sentiment could affect the direction of the USD, which could determine the path of gold and silver. Finally, the upcoming Chinese reports could also affect commodities prices. If the upcoming reports will show signs of progress, this could also pull up the prices of commodities.