Gold and silver changed direction again and sharply increased yesterday. Precious metals’ rally coincided with the rise in other related markets such as oil, stocks, and Euro. The renewed optimizing regarding the progress of Congress in dealing with the fiscal cliff may have contributed to the rise in markets. This optimism, however, might quickly turn in the days to follow. Yesterday, U.S existing home sales report for October came out: number of existing home sales rose last month by 2.1% – higher than expected – and reached 4.79 million. This news may have positively affected the rest of the financial markets during yesterday. Currently, the prices of gold and silver are slightly declining. On today’s agenda: Euro-group Meeting, Bank of Australia Governor Stevens speaks, U.S. Housing Starts and Building Permits, Bernanke’s Speech and Japanese Trade balance.

Here is a short outlook for precious metals for Tuesday, November 20th: 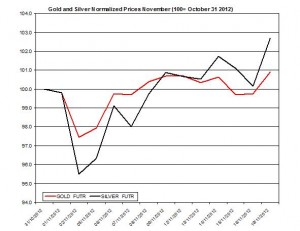 The ratio between the two precious metals declined on Monday to 52.26. During November the ratio edged down by 1.77% as gold slightly under-performed silver. 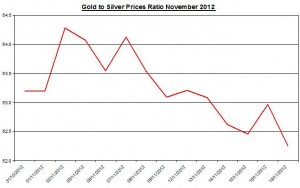 Euro-group Meeting: Following last week’s meeting, the EU ministers of finance had decided to make the decision regarding Greece’s next bailout package;  there might be, however, another delay in the EU leaders’ decision on Greece. In such a case, it may pull back the Euro again;

Bernanke’s Speech: In preparation for the government tackling the fiscal cliff by the end of 2012, many will look towards Bernanke’s speech that could offer some insight behind the Fed’s future monetary steps. There were some reports that suggest there is renewed optimism regarding the budget cut. The Chairman of the Federal Reserve will give a speech at the Economic Club of New York. The title of the speech is “The Economic Recovery and Economic Policy “;

U.S. Housing Starts: this report was historically correlated with gold– as housing starts rise, gold price tended to decline the next day (even when controlling to the U.S dollar effect); in the previous report, the adjusted annual rate rose by 15% to reach 872,000 in September;

Japanese Trade balance: The Japanese trade balance deficit for September 2012 rose by 112.2% compared to August’s, and reach 980 billion YEN (roughly $12.25 billion) deficit (seasonally adjusted figures). This rise is due to the hike in imports by 10%, and a modest gain in exports by 0.9%;

The Euro/ USD also rose on Monday by 0.56% to 1.2814. During the month, the Euro/USD declined by 1.13%. Moreover, some currencies such as Aussie dollar also appreciated during yesterday against the USD by 0.7%. This trend might have contributed to rise of bullion prices yesterday. As seen in the table below, the correlations among gold, Euro and Aussie are mid-string and robust: during November, the linear correlation between gold and AUD /USD reached 0.6 (daily percent changes); the linear correlation between the gold and Euro /USD was 0.56 (daily percent changes). Thus, if the Euro and other risk currencies will change direction and fall against the USD, they are likely to pull down gold and silver. 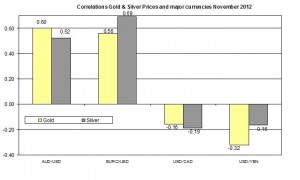 Current Gold and Silver Rates as of November 20th

The prices of gold and silver rose yesterday along with the rest of the market including stocks, oil and Euro. This rally, however, might change direction and pull back; yesterday’s sharp gain was perhaps an over reaction and speculation around the progress in Europe regarding the Greek debt problem, and budget talks in the U.S and the recent events in the Middle East.  Today the EU group will meet again.  If the EU Group meeting will result in approving the next Greek bailout, it could pull up the Euro. There are speculations, however, that the EU leaders will delay their decision to the next Summit. Today, Bernanke’s speech might offer some insight regarding the future steps of the FOMC. My guess, however, is that the speech won’t offer additional input regarding the Fed’s future steps. The U.S housing report could continue to be positive and show growth in housing starts; in such a case, it may adversely affect the price of gold. Finally, if the Euro and other “risk currencies” will change direction and decline against the USD, then they are likely to adversely affect precious metals.