Gold and silver bounced back from their tumble during last week and started off the week rising. This rally coincided with the slow recovery of the Euro and other “risk currencies” against the USD. Today the FOMC meeting will start. It will conclude tomorrow with the FOMC’s press conference and statement release. Currently, it seems the bullion market doesn’t expect big headlines coming out of this statement. There are reports that major Hedge Funds cut their bets in commodities; further, gold funds have had a net outflow of $158 million during the week. Spain’s bond rates are rising as there are still concerns regarding the economic stability of this country. Currently, the prices of gold and silver are falling. On today’s agenda: Canada’s Retails Sales report, Bank of Canada’s decision on its Overnight Rate, Governor King will speak, and China flash Manufacturing PMI.

Here is a short outlook for precious metals for Tuesday, October 23rd:

As seen below, the chart shows the developments of normalized prices of precious metals during September-October (normalized to 100 as of September 13th). During recent weeks, both gold and silver traded down. 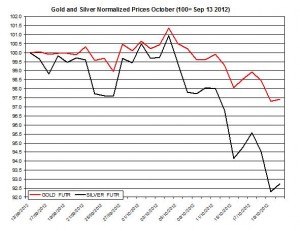 The ratio between the two precious metals decreased on Monday to 53.53. During the month, the ratio rose by 4.33% as gold slightly out-performed silver. 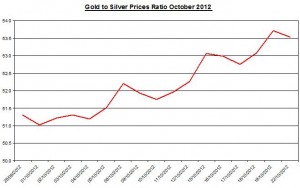 Today will start the penultimate FOMC meeting for 2012 (the next meeting will be during December 11-12).  Because of the recent FOMC decision to implement quantitative easing 3 and to extend its pledge of low rates to mid-2015, there aren’t high expectations that the Fed will introduce additional expanding monetary steps in this meeting. This could result in moderate fall in the prices of gold and silver.

Retails Sales Canada: This report will refer to the retails sales in Canada as of August. It may affect the direction of USD/CAD currency pairs, which is strongly correlated with commodities prices. In the previous report regarding July 2012, retails sales rose by 0.4%;

Governor King speaks: The governor of Bank of England is due to give a speech at South Wales Chamber of Commerce, in Cardiff; in his speech he could offer some insight behind the recent MPC interest rate decision and monetary policy; this speech may influence British Pound traders; 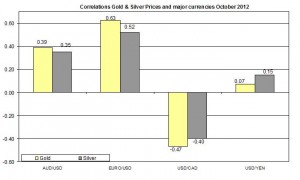 Current Gold and Silver Rates as of October 23rd

The prices of precious metals bounced back and their fall on Friday and slightly rose yesterday. Despite this recent rally, I don’t expect the prices of gold and silver to further rally for the rest of the week.  Today’s BOC rate decision could affect not only the Canadian dollar but also commodities prices that tend to be strongly linked with this currency. China’s manufacturing PMI report could also affect the commodities price if the index will sharply shift from last month’s rate. Finally, if the Euro and other “risk currencies” will depreciate against the USD, then they are likely to drag down precious metals.