The prices of gold and silver shifted gear and sharply rose yesterday. The recent news from Europe including the decline in Germany’s factory orders in November, and the rise in Euro Area unemployment rate to 11.8% may have contributed to the decline of the Euro. In Japan, some suggest BOJ might decide to introduce additional monetary easing this month. In such a case, this could weaken the Japanese yen and consequently could also affect commodities prices. Currently, gold and silver are traded down.  On today’s agenda: Final EU GDP 3Q 2012 Estimate, German Industrial Production, and U.S 10 Year Bond Auction.

Here is a short outlook for precious metals for Wednesday, January 9th:

As seen below, the chart shows the developments in the normalized prices of precious metals during November and December (normalized to 100 as of November 30th). During recent days, the prices of silver and gold have had an unclear trend. 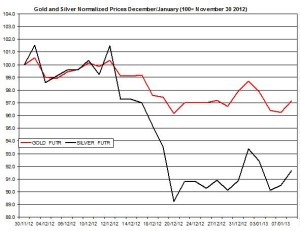 The ratio between the two precious metals declined on Tuesday to 54.61. During the month, the ratio slipped by 1.6% as gold has under-performed silver. 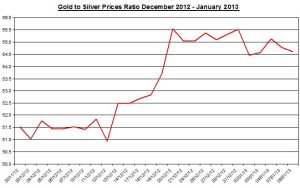 Final EU GDP 3Q 2012 Estimate: In the recent estimate the EU (27) GDP in the third quarter grew by 0.1% (quarterly basis); in the 2Q2012 the GDP growth rate was -0.2%. This shows a modest growth in the EU’s GDP. If there will be a sharp shift in this estimate it could also affect the Euro;

German Industrial Production: in the previous report the German industrial production declined by 2.6% (M-O-M) during October;

U.S 10 Year Bond Auction: the U.S government will issue its monthly bond auction; in the previous bond auction, which was held at the second week of December, the average rate reached 1.65%; if the rate will continue to fall, it could suggest that more traders become more bearish;

The Euro/ USD slipped on Tuesday by 0.25% to 1.3084. During the month, the Euro/USD fell by 0.83%. Alternately, some currencies such as Aussie dollar appreciated on Tuesday against the USD by 0.04%. The movement of these “risk currencies” didn’t seem to affect precious metals. The correlations among gold, Euro and Aussie remained weak in recent weeks: during December and January, the linear correlation between gold and Euro /USD is at -0.12 (daily percent changes); the linear correlation between the gold and AUD/USD was 0.05 (daily percent changes). These weak correlations might suggest the recent developments in gold and silver didn’t coincide or resulted from the shifts in the foreign exchange markets. Nonetheless, if the Euro and other risk currencies will depreciate against the USD, they might adversely affect precious metals.

Current Gold and Silver Rates as of January 9th

Prices of precious metals changed pace and rose on Tuesday. This rally, however, could be short lived and bullion might resume their slow paced downward trend as the week will progress. The speculations around tomorrow’s rate decisions including ECB and MPC might affect not only their respective currency but also commodities rates. The uncertainty around the future steps U.S policymakers will take in raising debt ceiling or the future spending cuts might affect gold and silver in the coming weeks. The recent proposal of minting a platinum coin worth 1 trillion dollar in order to circumvent the process of raising the debt ceiling might also influence traders in the coming weeks. The upcoming reports that will be published today including: Euro Area GDP for the third quarter and German Factory Industrial Production could affect not only the Euro but also precious metals. If these reports will show the EU economy isn’t progressing, they could adversely affect precious metals via the Euro. The U.S bond auction might provide a signal to the current market sentiment via the movement of the average yield. Finally, if the Euro and other “risk currencies” will depreciate against the USD, they might adversely affect gold and silver.