Gold and silver slightly declined on Tuesday. On the other hand, other commodities prices such as oil prices and the stock market indexes such as S&P500 rose during yesterday. The shift in market sentiment towards bullish may have contributed to decline in demand for precious metals and other safe haven investments. Yesterday, several U.S reports showed signs of slowdown in growth: new home sales declined by 4.6% in the recent month compared to the previous month; consumer confidence declined during March; Will gold and silver continue to decline? Currently, gold price is rising. New orders of core durable goods fell by 5.2%. These news items didn’t slow down the rally in the financial markets.  The speculations around the Cyprus bailout plan is currently pulling down the Euro and EU stock markets. These speculations might help rally gold and silver prices today.  On today’s agenda: German Consumer Climate, KOF Economic Barometer, Canada’s core CPI, U.S. Pending Home Sales, and GB Current Account.

Here is a short outlook for precious metals for Wednesday, March 27th: 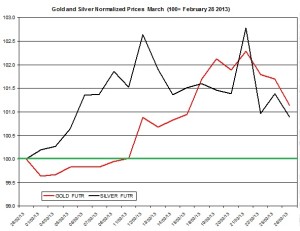 The ratio between the two precious metals edged down on Tuesday to 55.7. During the month, the ratio edged up by 0.24% as gold slightly out-performed silver. 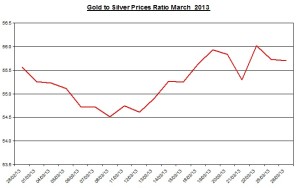 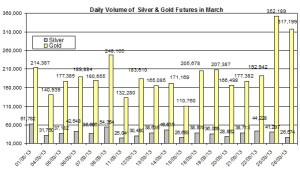 German Consumer Climate: Gfk group will come out with its German consumer climate index. If this report will continue to present growth, it might pull up the Euro;

KOF Economic Barometer: this report provides an estimate to the Swiss economy in the months to follow;

GB Current Account: This quarterly report will present of any changes in the gap between the impost and exports as of the previous quarter. Based on the recent report, the deficit contracted to 12.8 billion pounds.  This report might affect the strength of the British Pound;

Canada‘s core CPI: This report will pertain to the CPI and core consumer price index (controlling the volatile components such as energy, fruit and vegetables) for February. Based on the Canadian CPI report for January 2013, the core CPI edged up by 0.1% during the month;

U.S. Pending Home Sales: This report presents the changes in pending home sales for February; in the recent update, the pending home sales index bounced back and rose by 4.5% (M-over-M). These data are another indicator for the developments in America’s housing market;

The Euro/ USD changed course again and edged up on Tuesday by 0.07% to 1.286. During the month, the Euro/USD decreased by 1.59%. Moreover, many other currencies such as the Aussie dollar and Canadian dollar appreciated yesterday against the U.S dollar by 0.18% and 0.53%, respectively. The rally in risk related currencies against the U.S dollar didn’t seem to help pull up the prices of gold and silver prices. The correlations among gold, Japanese yen and Aussie dollar remained mid-weak during the month: during March, the linear correlation between gold and USD/Yen was -0.26 (daily percent changes); the linear correlation between the gold and AUD/USD was 0.12 (daily percent changes). These weak correlations imply the recent changes in precious metals markets had little to do with the daily shifts in the foreign exchange markets.

Current Gold and Silver Rates as of March 27th

Here is a reminder of the major events and publications that are scheduled for today and tomorrow (all times GMT):