Here is a short outlook for precious metals for Wednesday, November 7th:

As seen below, the chart presents the changes in the normalized prices of precious metals during recent weeks (normalized to 100 as of October 18th). During the past couple of days, both gold and silver bounced back from their downward trend. 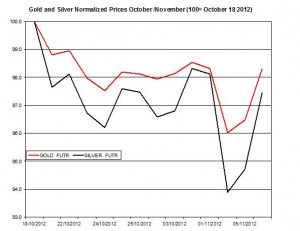 The ratio between the two precious metals declined again on Tuesday to 53.54. During the month, the ratio rose by 0.65% as gold slightly out-performed silver. 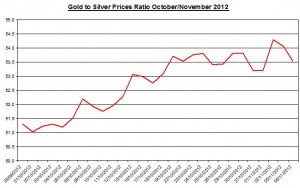 U.S 10 Year Bond Auction: the U.S government will issue another bond auction; in the recent bond auction, which was held at the second week of October, the average rate reached 1.7%; if the rate will continue to fall, it could suggest that more traders become more bearish;

Japan Current Account: this report will show the changes in the difference between exports and imports for Japan during last month; this news may affect the strength of the Japanese Yen;

German Industrial Production: in the previous report the German industrial production declined by 0.5% (M-O-M) during August;

The Euro/ USD slightly rose again on Tuesday by 0.16% to 1.2815. During the month, the Euro/USD declined by 1.12%. Moreover, many other currencies such as Aussie dollar also depreciated during yesterday against the USD by 0.67%. The decision of RBA to leave its rate unchanged may have contributed to the rally of the Aussie dollar yesterday. As seen in the chart below, the linear correlation between gold and Euro/USD remains mid-strong and robust: during October/November, the linear correlation between gold and Euro /USD reached 0.57 (daily percent changes); the linear correlation between the silver and Euro /USD was 0.5 (daily percent changes). Thus, if the Euro and other risk currencies will continue to rally against the USD, they are likely to positively affect gold and silver. 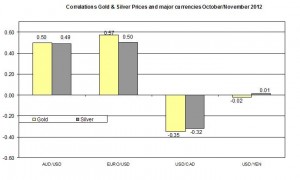 Current Gold and Silver Rates as of November 7th

The prices of bullion rose again on Tuesday. The U.S Presidential elections seem to have a short term substantial effect on the prices of gold and silver. The election of President Obama for a second term, seems to raise the concerns over the potential devalue of the USD and thus pulled up the prices of gold and silver. This market reaction was also the case in 2007. In any case, this recent rally might be short lived and soon after there could be a sharp pull back. The upcoming financial reports to be published today including German Industrial production and EU retail sales could affect the strength of the Euro. The upcoming U.S bond auction could signal the changes in the market sentiment. Finally, if the Euro and other “risk currencies” will continue to rally against the USD, then they are likely to positively affect precious metals prices.