Gold and silver changed direction again and tumbled down along with other commodities such as oil and stock indexes. Further, this fall coincided with the deprecation of the Euro and other “risk currencies” against the USD. Today the FOMC meeting will conclude. The FOMC will issue a statement later this day that could affect precious metals prices. U.S treasuries yields are still increasing and this trend could serve as an indicator for a rise in “risk taking sentiment”. If such a sentiment will continue it could adversely affect not only the demand for U.S treasuries but also bullion. Currently, the prices of gold and silver are increasing. On today’s agenda: FOMC Statement, U.S. New Home Sales, Flash Euro Area Manufacturing PMI, German Business Climate Survey, U.S. Flash Manufacturing PMI, Bank of Canada’s Monetary Policy and Press Conference, ECB President Speaks, and German 10 Year Bond Auction.

Here is a short outlook for precious metals for Wednesday, October 24th:

As seen below, the chart shows the changes of normalized prices of precious metals during September-October (normalized to 100 as of September 13th). During recent weeks, both gold and silver have had a downward trend. 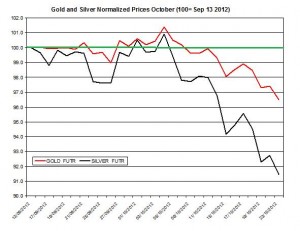 The ratio between the two precious metals rose on Tuesday to 53.77. During the month, the ratio increased by 4.8% as gold slightly out-performed silver. 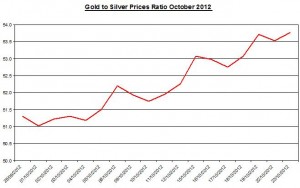 Today will conclude the penultimate FOMC meeting for 2012 (the next meeting will be during December 11-12).  Because of the recent FOMC decision to implement quantitative easing 3 and to extend its pledge of low rates to mid-2015, there aren’t high expectations that the Fed will introduce additional expanding monetary steps in this meeting. As seen in the table below, in the past when the FOMC didn’t change its policy the prices of gold and silver declined mainly on the next day.

ECB President Speaks: Mario Draghi will participate in a closed door meeting at the Deutsche Bundestag, in Berlin. Following last week’s EU Summit that resulted with no big headlines, perhaps in his speech he might refer to the future monetary steps of ECB and the actions that should be taken by the major economies in order to deal with the debt crisis. This speech might affect the Euro to US dollar exchange rate;

Flash German and Euro Area Manufacturing PMI: In the previous report regarding September 2012, the German PMI rose to 47.3 i.e. the manufacturing conditions are still contracting but at a slightly slower rate. This report serves as an indicator to the economic development of the Euro Area’s leading economies’ manufacturing conditions; this news, in turn, may affect the Euro/USD currency pair;

U.S. New Home Sales: in the previous report (for August), the sales of new homes declined to an annual rate of 373,000 – a 0.3% decline (month over month); if the number of home sales will change direction and rise, it may indicate a sign of some recovery in the U.S real estate market which may also affect the strength of the USD;

German Business Climate Survey: In the previous report for  September 2012, the business climate index declined from 102.3 in August to 101.4 in September; if this trend will continue, it might adversely affect the Euro;

U.S. Flash Manufacturing PMI: During September 2012 the index rose to 51.5%, which means the manufacturing is expanding; this index may affect forex, crude oil and natural gas markets;

German 10 Year Bond Auction: the German government will issue another bond auction; in the recent bond auction, which was held at the last week of September, the average rate reached 1.52%;

Current Gold and Silver Rates as of October 24th

The prices of precious metals changed direction again and tumbled down on Tuesday. This fall may continue today, especially if related markets including stocks and other commodities will continue their downward trend. The upcoming FOMC statement might result with little effect on the bullion market, especially the FOMC won’t make big announcements. The upcoming U.S reports including manufacturing PMI and new home sales could adversely affect bullion rates if these reports will be positive and exceed expectations.  Finally, if the Euro and other “risk currencies” will further to depreciate against the USD, then they are likely to also pull down precious metals.