Gold and silver prices sharply fell on the last day of October after they had risen during recent weeks. Today the FOMC meeting will commence; the statement of the FOMC decisions followed by Bernanke’s press conference will be held tomorrow. Currently gold and silver prices are traded down. Today, the U.S. Manufacturing PMI report will be published and Great Britain’s GDP growth rate report for Q3 2011.

Here is a market outlook of precious metals prices for today, November 1st: 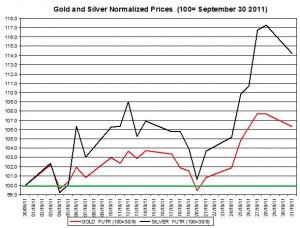 The ratio between gold and silver prices rose on Monday, October 31st to 50.22. During October, silver price inclined by a slightly larger rate than gold price as the ratio slipped by 6.9%. 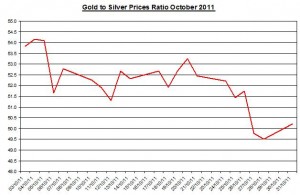 U.S. ISM Manufacturing PMI: This report will present the change in manufacturing sector on a national level during October. In September the index grew to 51.6% a one percent point increase; this index might affect traders of forex, and commodities (see here my review of last report);

GB GDP Q3 2011: This report examines the quarterly growth rate of the British economy during the third quarter; during the previous quarter the GB economy grew by only 0.2%;

The Euro to U.S Dollar exchange rate sharply fell on Monday by 2.04% to reach 1.3858 – the lowest level since October 20th. The recent involvement of Japan in the forex exchange rate markets to depreciate the YEN against the USD and other currencies in an attempt to protect Japan’s exporters, might continue to affect the Forex markets today including other currencies such as EURO and AUD to fall against the USD and consequently may also be a partial explanation for the recent decline in gold and silver prices.

The U.S. 10-year Treasury yield continued to decline on Monday by 0.17 percent points to 2.17%; during October the 10 year treasury yield rose by 0.25 percent point. The LT yields sharply fell in the past couple of business days and coincided with the sharp falls in gold and silver prices. If the yields will continue to fall, this might indicate a curb in the recent growth in risk appetite in the markets that may also curb the demand for commodities as well as stocks.

The precious metals prices are currently traded down in the European markets:

The current ratio of gold to silver prices per ounce is at 50.87.