Gold and silver prices recorded last week one of the worst weekly performances in 2011. Will this week continue the sharp declines in precious metals prices, or will they recover during this week. The major news item came today from North Korea as Kim Jong-Il died over the weekend. How if any will this news may affect gold and silver prices? Today, the ECB President will give a speech, and Australia’s Central Bank will have a monetary policy meeting and rate decision. Currently gold and silver are traded down.

Here is a market outlook of precious metals prices for today, December 19th: 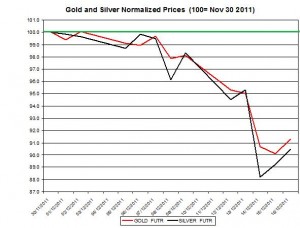 The ratio between gold and silver prices nearly didn’t change on Friday, December 16th and reached 53.85. During the month the ratio slightly rose by 0.9% as gold price moderately outperformed silver price. 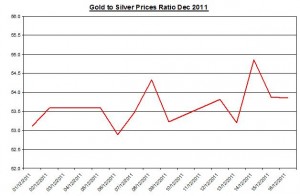 The correlation between gold price and silver price continues to remain high in December as it was in previous months. 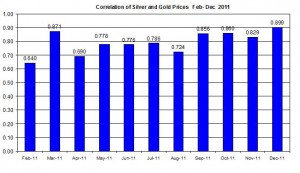 ECB President Speaks: Following the ECB’s interest rate reduction, this week the President of the European Central Bank, Mario Draghi will talk about the economic progress and stability of the EU. This speech might impact the commodities markets in the unlikely event of a change or even a hint of change in ECB’s policy of getting more involved in EU debt crisis;

The Euro to U.S Dollar moderately rose again on Friday by 0.23% to reach 1.3046. Other forex exchange rates such as the Australian dollar and Yen also appreciated against the US dollar. The appreciation of these currencies may also affect gold and silver prices to further rally.

The chart below shows the development of the correlations between precious metals prices daily percent changes and &P500 index. It shows the strong positive correlations during the past couple of months. 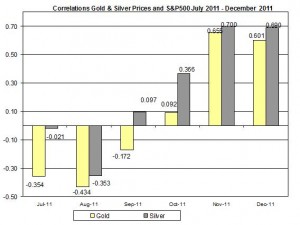 The U.S. 10-year Treasury yield declined again on Friday by 0.06 percent points to 1.86% – the lowest level since October 4th; during December the 10 year treasury yield dropped by 0.22 percent point. Furthermore, during December there were positive correlations among the daily percent changes of U.S. 10 year notes yield and gold and silver prices (0.053 and 0.444, respectively). If the LT U.S. treasury yield will further drop, it may also continue to pressure down silver price and to a lesser effect gold price. 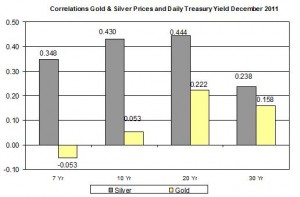 The major precious metals are currently traded down in the European markets:

Gold and silver prices may continue to recover during the upcoming week from the sharp drops recorded during last week. But the recent news of the death of Kim Jong-Il may raise the uncertainty levels in the political and thus also the financial climate; this in turn doesn’t necessarily raise the risk factors in the markets, but could mean that trades may push the forex and commodities markets to different directions throughout the day. I speculate that this news won’t stir up the markets for the time being until there will be more substantial evidence of the stability of North Korea. In the meantime, if the Stocks and Forex markets will trade down, it may also adversely affect precious metals prices as well.