Gold and silver prices slightly declined again on the first day of the week, but currently they are moderately rising. The recent news of the unexpected rise in the German confidence report maybe among the factors to further rally the Euro and thus also precious metals prices.  Today, the U.S. Housing Starts and building permits report will be published, the Canadian consumer price index and Bank of Japan announces its monetary policy and rate decision.

Here is a market outlook of precious metals prices for today, December 20th: 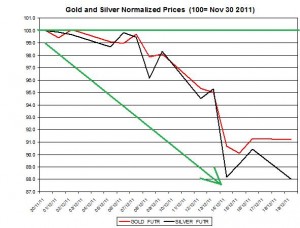 The ratio between gold and silver prices inclined on Monday, December 19th and reached 55.30. During the month the ratio gained 3.6% as gold price has outperformed silver price. 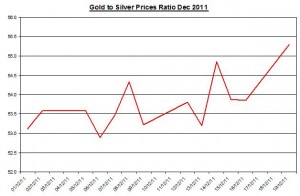 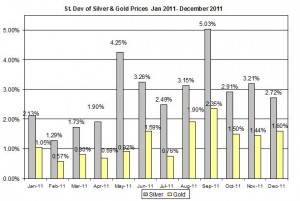 The sharp declines in commodities prices including gold price was probably due to the sharp reduction in speculators’ bets on commodities; according to Bloomberg, wagers on gold futures declined to an eight week low. That being said, Goldman Sachs is still predicting that 2012 won’t be a recession year and commodities will maintain a 15% return in the upcoming year. This means that while gold price may further decline in the days to come, it may rally in the long run.

Canadian Core CPI: This report will refer to the core consumer price index changes during November 2011 that controls the volatile components such as energy, fruit and vegetables. According to the Canadian CPI report for October 2011, the CPI rose by 2.9% during the past 12 months. This news could affect the Canadian dollar which is strongly correlated with commodities prices.

U.S. Housing Starts and Building Permits: the US Census Bureau will publish the U.S housing report; the housing starts was historically correlated with gold price – as housing starts declined, gold prices tend to rise the following day (even when controlling to the U.S dollar effect); in the previous report, the adjusted annual rate of housing starts slightly rose by 0.3%, while adjusted annual rate of building permits inclined by  10.9% (M-o-M) (see here the recent review);

Bank of Japan – Rate and Monetary Policy Decision: In the previous statement, the BOJ kept the interest rate unchanged at 0 to 0.1 percent. If the BOJ will prepare additional monetary stimulus plans, it may affect the forex market and commodities markets considering that Japan is among the leading countries in importing commodities such as gold and crude oil;

The Euro to U.S Dollar moderately slipped on Monday by 0.36% to reach 1.2999. Other forex exchange rates such as the Canadian dollar and Australian dollar also depreciated against the U.S dollar. If these currencies will change direction today and appreciate against the U.S. dollar, then it may affect gold and silver prices to incline.

The chart below presents the development of precious metals prices and &P500 index during December (they are all normalized to November 30th). It shows that S&P500 index declined during the month but by a a lesser rate than gold and silver prices. 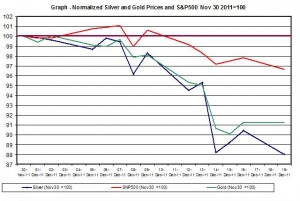 The major precious metals are currently traded slightly up in the European markets:

Gold and silver prices didn’t do much yesterday, but many anticipate that the precious metals will rally from the sharp declines of last week and curb some of the falls of December. The upcoming reports of the housing market in the U.S. may affect gold price to rally if the reports won’t show an improvement. In the meantime, if the Stocks and Forex markets will rally today, this may also positively affect precious metals prices to rise.