Here is a market outlook of precious metals prices for today the last day of  November: 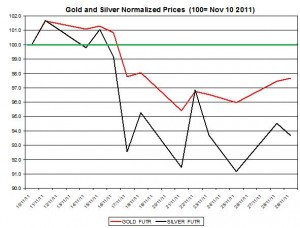 The ratio between gold and silver prices slightly inclined on Tuesday, November 29th to 53.80. During November, gold price fell by a lower rate than silver price so that the ratio rose by 7.1%. 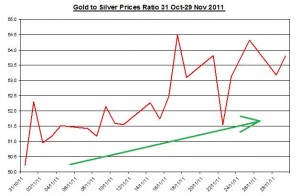 Despite the different developments in gold and silver prices during the month, their relation was still strong as the linear correlation of their daily percent changes was still high and positive during November. 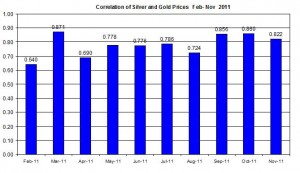 EU finance ministers said in yesterday’s meeting that the IMF’s role in containing the ramifications of ht European debt crisis will need to be expanded. Germany and France are trying to reach an agreement on budget cuts among European countries. The depreciation of the Euro currency may also adversely affect gold and silver prices as the US dollar becomes stronger.

In the mean time, Germany’s bonds rose for the first time in a week: Germany’s 10 year bonds yields slipped by 0.04 percent points and reached yesterday 2.29%.

ADP estimate of U.S. non-farm payroll: ADP will provide an estimate in the U.S employment for the month of November;

Canada GDP by Industry: This report will present the changes in major industrial sectors for September 2011. In the previous report regarding August 2011, the real gross domestic product rose by 0.3% in August; this report might affect the Canadian dollar and consequently commodities prices (for the full previous report);

Australian Retail Trade: The upcoming report will regard October 2011. In the recent report regarding September 2011, the seasonally adjusted retail trade slightly rose by 0.4% (M-2-M). This news may affect traders of AUD and consequently commodities prices that Australia exports  (see here last report);

China Manufacturing PMI: this index will cover 800 companies in 20 industries in China; according to the recent HSBC Manufacturing PMI report regarding September the PMI reached 50.4 – a slight decrease from the previous August index of 51.2;

The U.S. 10-year Treasury yield slightly rose yesterday by 0.03 percent points to 2.0% – the highest yield level since November 18th. During November, the correlation between U.S. 10 year notes yield and gold and silver prices were strong and positive (0.304 and 0.458, respectively). This means that if the LT U.S. securities yields will change direction and rise, this may indicate that the uncertainty in the financial markets tend to fall and thus it may also trade up gold and silver prices.

The Euro to U.S Dollar exchange rate very slightly declined yesterday and reached 1.3317. Other forex currencies didn’t have a clear trend and some appreciated against the US dollar including the Canadian dollar and Australian dollar. The positive correlations among the daily percent changes of gold price, silver price and forex exchange rates may affect the daily changes of gold and silver prices mainly if the forex currencies will change by a high rate. If the US dollar will weaken during the day, the gold and silver prices are likely to increase.

The major precious metals are currently traded aharply up in the American markets:

Gold and silver prices, much like the rest of the financial markets such as Forex and stock markets indexes, didn’t do much yesterday. This slowdown in activity could quickly change in this economic climate. The reports that will be published today including Canada’s GDP and U.S. home sales might have a moderate effect on the markets. If the American stock markets will tend to increase and the U.S. securities yields will also incline, it may indicate that gold and silver prices will tend to rise as well.