Gold and silver prices sharply increased for the second straight day after the FOMC announced on Wednesday it will keep the interest rates low until late 2014. Currently, gold and silver are traded with little changes. Today, the U.S. GDP growth rate for the fourth quarter will be published (U.S GDP expanded by 2.8% in Q4 2011), along with the Euro Area monetary development, and the KOF Economic Barometer.

Here is a market outlook of metals prices for the last day of the week, January 27th: 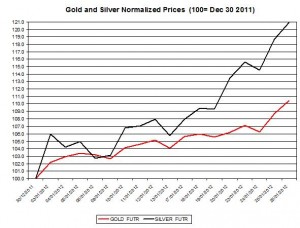 The ratio between gold and silver prices slightly fell on Thursday, January 26th and reached 51.27. During January the ratio fell by 8.66% as silver price has slightly outperformed gold price.

U.S GDP 4Q 2011: In the third quarter the GDP grew by 1.8%, compared with 1.3% gains in the second quarter. This shows a slight rise in the growth rate for the US’s GDP. Current expectations estimate the U.S. growth rate in Q4 will be slightly higher than the previous quarter’s (for the final estimate of 3Q GDP).

Euro Area Monetary Development: In the November report, the annual growth rate for M3 sharply fell to 2.0%. The M1 rose to 2.1%. Finally, the annual growth rate of loans to private sector declined to 1.7%. If the M1 and M3 will decline in the upcoming report it could indicate a slowdown in the Euro Area inflation and may affect next month’s ECB’s rate decision (see here the last report);

KOF Economic Barometer: this report offers an outlook of the Swiss economy in the months to come. In the recent press release, the report predicted the Swiss Economy is headed towards stagnation in 2012;

The Euro/U.S Dollar very moderately increased yesterday by 0.02% to reach 1.3108 – this was the fourth consecutive day the Euro appreciated against the USD; the Euro and Australian dollar are strongly and positively correlated with the daily percent changes of gold and silver prices (see chart below); thus if the Euro and Australian dollar will continue to rise against the USD it could indicate precious metals prices will trade up. Currently, the Euro/USD is falling. 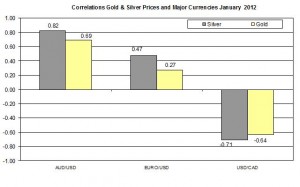 Gold and silver prices sharply rose in the past couple of days; this rally  may have been stem, in part, by the FOMC decision to keep rates low for a longer time than the FOMC had pledged previously (until late 2014 instead of mid 2013). The recent rally of the Euro and Australian dollar may have also helped with the recovery of precious metals prices. The U.S GDP report may also affect trading today if it will show a dramatic change in the growth rate. On October 27th, when the first estimate of the U.S. GDP for Q3 2011 came out with a 2.5% growth rate, which eventually was corrected to a mere 1.8% growth rate in the last estimate, gold and silver prices sharply increased. I speculate this rally will occur again if the GDP will grow by an impressive figure (say at least 2.5%). In the mean time I speculate gold and silver prices will keep their upward trend even if there will be corrections along the way.