Here is a market outlook of precious metals prices for today, October 24th: 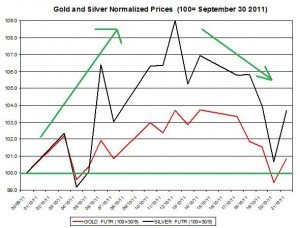 The ratio between gold and silver prices sharply declined on Friday, October 21st to 52.45. During October, silver price inclined by a slightly larger rate than gold price as the ratio fell by 2.7%. 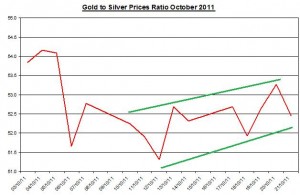 Euro Area Manufacturing PMI: In the last report regarding August, the Euro Zone Manufacturing PMI reached 48.4. This report will provide an indicator to the economic growth of the Euro zone economy and could influence the Euro/USD exchange rate consequently major commodities prices;

ECB Press Conference Trichet Speaks: Jean Claude Trichet, President of the European Central Bank, will probably refer to the recent EU Summit which was held yesterday (see below). This speech may affect not only the Euros to US dollar exchange rate, but also major commodities prices such as gold price;

Euro Summit – Round One for the Week

The first of two EU summit was held yesterday. This summit was the first of two summits that will be held this week (the next one will be on October 26th) and was the 13th summit in the past 21 months. In a nut shell, there were any big headlines from the recent summit as the European leaders didn’t reach an agreement in restructuring the Greek debt: basically, the current rumors state that the banks offered a haircut of 40% of the Greek debt, while the EU leaders were pushing for at least a 50% haircut on debt. Germany was still warding off France’s attempt to boost the EFSF. As long as there is uncertainty in this front, it’s likely to keep gold and silver prices high.

Despite the ongoing debacle in the EU summit, there are reports that Hedge funds are renewing their bullish bets in raw materials over the expectations that the U.S. economy is coming out of its slowdown.

The U.S. GDP report for the third quarter will be published this week; some expect that this report will show a 2.5% growth – the highest quarterly growth rate for the U.S. in 2011. If these reports are true then it could ease some of the uncertainty and thus curb the demand for safe haven investments such as gold and silver.

The Euro to U.S Dollar exchange rate inclined on Friday by 0.84% to reach 1.3896; other currencies also were traded up against the USD including CAD and AUD. If the “risk currencies” (AUD, Euro and CAD) will rise today, they might help push up gold and silver prices. 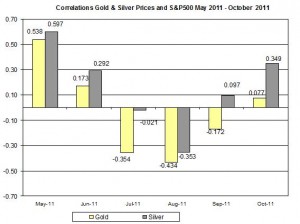 The U.S. 10-year Treasury yield slightly inclined on Friday by 0.03 percent points to 2.23%; during October the 10 year treasury yield rose by 0.31 percent point. This shift coincides with the gains the U.S. stock markets and the implementation of the Fed’s recent LT securities purchase plan.  As a result, the correlation between gold prices and US 10 year treasury yield shifted form negative relation in the past three months to moderate positive relation; this is another indication that the markets are claming down.

The current ratio of gold to silver prices is at 52.31.