Gold and silver prices bounced back on Friday from the sharp falls they have had a day earlier. During September both metals didn’t do much despite their high volatility. What is next for gold and silver prices? The rising concerns over Greece defaulting on its debt might be among the contributing factors for the current decline in the Euro/USD resulting in gold prices starting the week falling as the USD appreciates.  Today, the minutes of the last Monetary Policy meeting of Australia’s Central bank will be published.

Here is a market analysis and outlook of precious metals for today, September 19th: 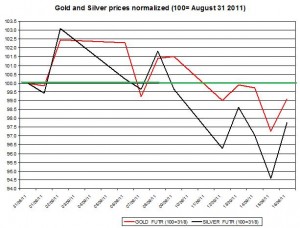 The ratio between gold and silver prices reached on Friday, September 16th 44.44. During September, gold price has slightly outperformed silver price as the ratio slightly inclined by 1.3%. 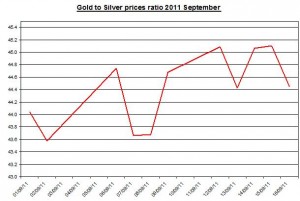 The two precious metals still have a strong, positive and consistent correlation during September as they did in previous months. 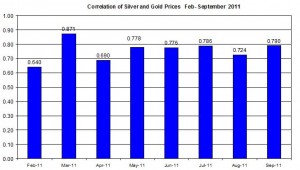 Reserve Bank of Australia Monetary Policy meeting: The minutes of the monetary policy meeting of the reserve bank of Australia will be published, regarding the recent decision of the Bank’s basic interest rate; this decision might also affect the AUD/USD exchange rate and consequently gold and silver prices (see here last rate decision);

The Euro to USD changed direction on Friday and slightly declined by 0.58% to 1.3796, after it inclined by 0.9% during last week; during September the EURO/USD rate fell by 4.0%. If the USD will continue to appreciate today against major currencies including Euro, AUD and CAD as it did at the end of last week; it may also affect gold and silver prices to trade down during the day.

The S&P500 index continue to rise as it inclined on Friday by 0.57%;  during the week it has completed a 5.35% rally, but during September the S&P500 index decreased by 0.24%. The negative correlation between the S&P500 index and gold and silver prices (as of September it was -0.639 and -0.207, respectively) suggest that the changes in precious metals’ prices coincides  to  a certain extent with the rally in the US stock markets. If the stock markets will continue to rise, it may dampen the rally of gold and silver as alternative investment to the stock market. 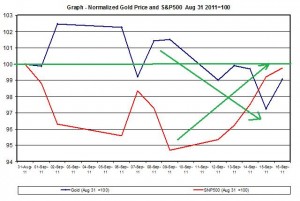 The US 10-year Treasury yields shifted direction on Friday and slightly fell 0.01 percent points to 2.08%; during September they have fallen by 0.15 percent points. US long term Treasury yields have strong negative correlations with gold price daily percent changes, e.g. the linear correlation between 7 yr Treasury yield and gold price during September (up to date) was 0.668; thus if the yields will continue to drop, it may reflect a renewed purchase spree by traders of safe heave securities and may coincide with a rise in gold price.

According to the recent report regarding July of the U.S. Department of the Treasury, regarding the changes in domestic and foreigners’ holdings of U.S. Treasuries, the net foreign purchases of longer-term U.S. securities grew by $9.5 billion during August; on the other hand, the holdings of longer-term U.S. securities by countries slightly slipped by $17.9 billion during July compared with June’s figures. This finding suggest that there is still a growing demand for US Treasuries by foreigners that might also reflect a growing demand for safe haven investments such as gold and silver.

The precious metals prices are currently traded sharply down in the U.S. markets:

The current ratio of gold to silver prices is at 45.12.

Gold and silver prices didn’t do much in the first couple of weeks of September, despite their sharp shifts and high volatility. The financial markets are still stirring over the stability of Europe and the progress of US’s economy. Many still bet on commodities to keep rising in the near future. The direction of the stock markets, the direction of the Euro/USD exchange rate, and the L-T US securities yields may provide an indicator to the direction of bullion prices during the day. Gold and silver prices might trade down during the day over the weak Euro, but I still speculate that in the near future gold and silver prices will continue their slow upward trend, even if they may continue seeking direction throughout the week.