Gold and silver prices ended the week with sharp gains; during yesterday they have also increased as major stock markets in Asia and Europe were traded down. Due to the long weekend in the US (Labor Day) there were no trading yesterday , but current expectations are that there will be falls in US stock markets as there were yesterday in other stock markets. If this trend will continue today it will likely to provide back-wind for gold and silver price to further rise. There are reports of growing demand in India and China for gold. Today, the US non-ISM manufacturing PMI report will be published; bank of Japan will decide its rate and publish a monetary policy statement; Australian GDP for Q2 2011 will also be published, and finally Reserve Bank of Australia will decide on its cash rate. 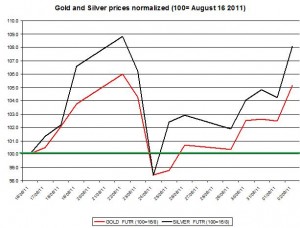 The ratio between gold and silver prices remained around 43-45; on Friday, September 2nd the ratio slightly fell to 43.58. During September, silver price has slightly outperformed gold price as the ratio declined by 0.6%. 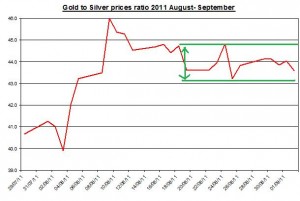 US Labor report – no jobs were added in August

The recent US employment report didn’t show any improvement as there were no jobs added during August. This news helped push gold and silver prices up while the stock markets were traded down.

ISM Non-Manufacturing PMI: This report could serve as another indicator to the economic progress of the US, as it shows the changes of non-manufacturing sector during August 2011; a disappointing report might pull down the US stock market and thus push up gold and silver prices.

Japan’s rate decision and monetary policy report: In the last statement the bank kept the interest rate unchanged at 0 to 0.1 percent. The recent announcement of BOJ to expand its stimulus plan from 10 trillion yen ($130 billion) to 15 trillion yen ($194 billion) is likely to further weaken the yen against major currencies including US dollar. Japan is among the leading countries in importing commodities such as gold.

The US 10-year Treasury yields ended the week with sharp falls of 0.13 percent points; during September they have fallen by 0.21 percent points. If the demand for U.S. Treasury bills will continue to rise and the yields will further decrease, it may further indicate people are seeking safe havens instruments.

The Euro to US dollar exchange rate declined again for the fourth straight business day, on Friday by 0.38%; this ongoing appreciation of US dollar against the Euro might have curbed some of the gains in gold and silver prices in recent days. The US dollar also appreciated against other major currencies including Australian dollar and Canadian dollar.

The precious metals prices are currently traded with mixed trends in the European markets:

The current ratio of gold to silver prices is at 44.62.

Gold and silver prices had an upward trend in recent weeks as the concerns over the debt crisis in Europe rises; the recent news form this front is that Germany may not participate in the bonds bailout. The dissipating US labor report also didn’t help ease the speculations around the economic slowdown of the US, and whether the Fed will issue another stimulus plan. If the US stock markets will trade down and the long term US Treasury bills yields will drop, then these events are likely to indicate a trade up in gold prices. Silver price is likely to follow in gold’s foot steps and incline as well.  Therefore, I still think gold and silver prices will continue to rise at a slow pace.