Gold and silver prices didn’t do much on a weekly scale. Today there are several items of the agenda including:  KOF Economic Barometer, Euro Area Flash Estimate of Annual Inflation and Canada’s GDP by Industry.

Here is a short outlook for gold and silver prices for Friday, March 30th:

KOF Economic Barometer: this report offers an estimate of the Swiss economy in the months to come. In the previous press release, the barometer predicted the Swiss Economy isn’t headed toward a slowdown and starts to show some signs of recovery;

Euro Area Flash Estimate of Annual Inflation: the inflation in Euro Area reached 2.7% in February. If the upcoming inflation rate estimate will change direction and rise, it may lower the chances of an additional ECB interest rate reduction;

Canada’s GDP by Industry: the report will show the changes in major industrial sectors for January 2012. In the previous report regarding December 2011, the real gross domestic product edged up by 0.4% and the same rate was for the fourth quarter of 2011. This report may affect the trading on the Canadian dollar currency and consequently commodities prices (for the full report);

The U.S. 10-year Treasury yield declined in the past few days and the demand started to pick up again. This rally in LT securities yields may indicate that the demand for “secure investments” start to rise again. During March there was a mid-weak negative correlation between the changes in U.S. long term Treasury yield and changes in gold price. The chart below demonstrates the development of the U.S. 10 yr yield vs. gold price during recent months. This char suggest that if the LT U.S. treasury yield will continue to fall, it may indicate that gold price may rise. 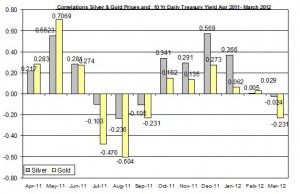 If the Euro/USD and Aussie dollar /USD currencies pairs will continue their rally of the past several weeks, it may also positively affect gold and silver prices.

Gold and silver prices started off the week strong after the Bernanke’s labor speech, but the following days gold and silver traded down. Thus there were no lingering effects to the Fed Chairman’s speech. Today, the EU summit will take place and could have a strong effect on the direction of gold and silver prices via the changes in market sentiment and the Euro. The U.S GDP growth rate report for Q4 2011 will be released. If this estimate will be substantially different from the previous estimates, it could stir up the markets a bit and may even affect forex and commodities prices including precious metals prices. The U.S jobless weekly update may also affect the strength of the US dollar and consequently gold and silver prices.