Gold and silver prices ended the week on a negative note; this drop may have been stem by the low growth rate in China’s economy during the first quarter of 2012. In any case, the situation hasn’t improved from bullion prices as both silver and gold and currently traded down. Today, there are several items on the agenda worth noticing including: U.S. Retail Sales Report, Australia’s Bank Monetary Policy Meeting, FOMC member Pianalto Speaks and U.S TIC Long Term Purchases.

Here is a short outlook on gold and silver prices for Monday, April 16th:

The chart below presents the movement of gold and silver prices during the month (prices are normalized to March 30th). 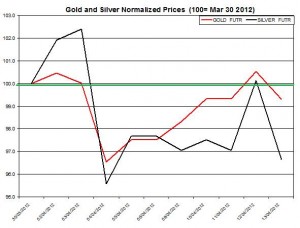 The ratio between gold and silver rose to 52.89. During the month the ratio increased by 2.76% as gold has outperformed silver. In the chart below are the shifts in this ratio during April (up to date). 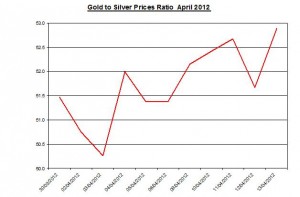 During April the volatility of gold and silver prices started to rise again as their standard deviations have increased and reached their highest level in 2012. Therefore, the prices of bullion are more volatility in recent weeks than in earlier stages of 2011. This could mean the increase in volatility is an indication for the uncertainty in the bullion market has also risen. 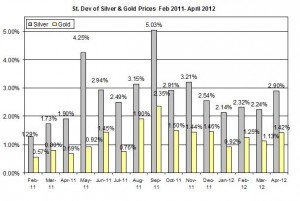 13:30 –U.S. Retail Sales Report: in the previous report, the retail sales increased by 1.1%; if this trend will continue it may positively affect USD; this report could signal the development in U.S’s commodities demand (for my review of the recent retail sales report).

14:00 – U.S. TIC Long Term Purchases: The Treasury International Capital report will show the main changes in the purchases and sales of US long term treasuries in February 2012. In the previous report regarding January 2012, the net foreign purchases of U.S Treasuries longer-term notes reached $101 billion;

17:30 – FOMC member Pianalto Speaks: I don’t usual point out to speeches of FOMC members expect of Bernanke’s however in preparation to the April FOMC meeting, this speech might revel another FOMC member’s opinion in regards to the recent developments in the U.S’s economy and the FOMC policy including the low rates and possible QE3; if Pianalto will hint of another QE program or will talk about the slow recovery of the U.S labor force, this news could affect not only the U.S dollar (depreciate the dollar), but also gold and silver prices (positively affect bullion);

The Euro/U.S Dollar declined on Friday by 0.83% to 1.3078. During April Euro/U.S Dollar decreased by 1.99%; furthermore, the Aussie dollar also depreciated against the U.S. dollar by 0.65% during Friday’s trading. These currencies tend to be positively and linearly correlated with the daily percent developments of gold and silver prices. Thus, if the Euro and Australian dollar currencies will continue to trade down today, they may signal gold and silver may also continue to decline.

Gold and silver prices declined on Friday and this decrease may continue today if the market sentiment won’t change. The debt auction in Spain may affect the Euro. If the auction won’t go well it could adversely affect the Euro and thus may also trade down precious metals prices.  Furthermore, if the U.S reports including retail sales will continue to show growth it may strengthen the USD and thus also help pull down gold and silver prices.