Gold and silver prices bounced back on Thursday (there were no commodities trading on Friday on account of Good Friday), after they had sharply declined on Wednesday. On Friday the U.S. non-farm payroll report came out and this news may affect today’s trading.  Gold and silver didn’t do much during last week when examining their performance on a weekly scale. Currently, gold  prices are rising. Today, U.S. federal balance report will be published, China’s trade balance, GDP growth rate for Q1 2012, and CPI will come out.

Here is a short outlook on gold and silver prices for Monday, April 9th:

The chart below presents the shifts in gold and silver prices during the month so far (prices are normalized to March 30th). 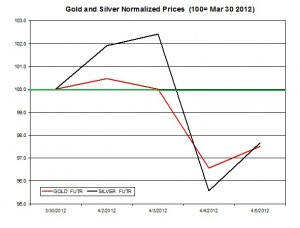 The ratio between gold and silver edged down to 51.37. During the month the ratio slipped by 0.18% as gold has slightly underperformed silver. In the chart below are the changes in this ratio during the month (up to date). 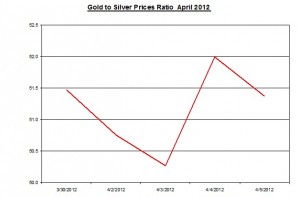 The U.S.labor force didn’t rise as many had expected: according to the recent U.S. employment report, the number of non-farm employees rose by 120,000.

As I have already explained in the April gold price monthly report, historically, as the non-farm payrolls rose gold price tended to decline; this correlation was mostly due to the effect this news had on the U.S dollar; the news of the moderate increase in the U.S. labor force during March could affect bullion prices in two directions: it could have a positive effect on gold and silver prices because this slowdown might rekindle the speculation around another stimulus plan to be issued by the Fed. I think it’s still early to consider this figure as a shift in the economic growth of theU.S.

Alternatively, The table below shows the correlation between the news of the U.S.non-farm payroll employment changes and the daily changes in gold and silver prices on the day of theU.S. labor report publication. This table suggests that (all things being equally) gold and silver prices may moderately decline today. 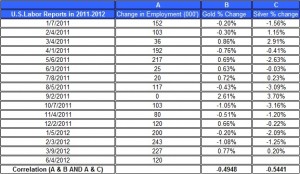 U.S. Federal Budget Balance: this upcoming publication will present the changes in the U.S federal balance for March 2012; this report indicates the government debt growth and thus may affect the U.S dollar. In the last report regarding February the deficit sharply rose by $231 billion; this report may affect the strength of the US dollar;

China’s Trade Balance: according to the previous report, China’s trade balance changed direction from a $27.3 billion surplus to a $31.5 billion deficit; if this trend will continue it could indicate that China’s economic growth is slowing down and thus may adversely affect prices of commodities;

China CPI: during February, the Chinese inflation rate sharply fell to an annual rate of 3.2% (it was 4.5% in January); this rate is well below China’s inflation target of 4% in annual terms. If the inflation will continue to fall, it could induce the People Bank of China’s ease some of its monetary restrictions to jumpstart the economy; China is among the leading countries in importing  gold;