Here is a short analysis on gold and silver for Monday, March 5th:

The chart below presents the developments of gold and silver during the last couple of weeks (prices are normalized to February 16th). 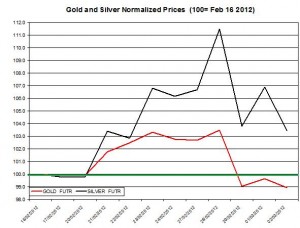 The ratio between gold and silver rose during Friday, and reached 49.52. During the week the ratio declined by 1.25% as silver has moderately outperformed gold. In the chart below are the changes in this ratio during February and March. 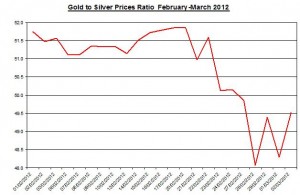 U.S. ISM Non-Manufacturing PMI: This report will present the developments in the non-manufacturing sector during February 2012. During January this index moderately rose to 56.8%; this index may affect the strength of US dollar (see here the recent report);

U.S Factory Orders: According to the previous flash report, during January new orders of manufactured durable goods slipped by $8.6 billion to $206.1 billion;

The Euro/U.S Dollar declined on Friday by 0.85% to 1.3198. During the week Euro/U.S Dollar decreased by 1.87%; on the other hand, the Australian dollar appreciated against the U.S. dollar by 0.85%. Since these two currencies are historically linked with the movement of gold and silver prices; if the Euro and Australian dollar will trade down during the day; it could indicate that gold and silver prices will follow and also decline. Currently, the Euro/USD is falling.

Due to the sharp movements of gold and silver prices during last week, they have both ended up below their initial starting point, During the upcoming week two main events might stir up the metals markets: the ECB rate decision and the U.S. non-farm payroll report. The recent decision of ECB to implement the nearly €530 billion LTRO fund, which will provide loans to struggling EU banks may continue to affect the Euro/USD and consequently the direction of gold and silver prices.     The debt crisis in Greece may also stir up the markets if there will be big headlines from this front. Finally, the upcoming reports regarding non-manufacturing PMI and factory orders could trade down gold and silver prices if these reports will be positive and strengthen the US dollar.