Gold and silver prices sharply fell yesterday and thus nullified their sharp gains from the beginning of the week. Currently gold and silver are trading up. Yesterday the U.S core durable report came out and was positive but may have fell short of the projections. This report may have been responsible for the drop in not only gold and silver prices, but also other commodities prices and U.S stock market indexes. The leading EU ministers of finance will convene today and may decide to raise the rescue funds to €1 trillion it order to ease the market anxiety. In such a case, this news may positively affect the Euro and consequently also affect gold and silver prices. Today there are several additional items on the agenda including:  U.S. Jobless Claims Weekly Update, Final U.S GDP 4Q 2011 Estimate and Bernanke will give a short speech.

Here is a short forecast on gold and silver prices for Thursday, March 29th:

The chart below shows the developments of gold and silver prices during the past couple of weeks (prices are normalized to March 13th).  The chart shows the fall and rise of precious metals prices. 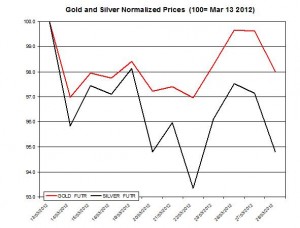 The ratio between gold and silver edged up to 52.17. During the month the ratio rose by 5.6% as silver has underperformed gold. In the chart below are the changes in this ratio during the month. 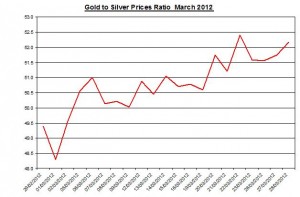 During the past four months there has been a decline in the volatility of gold and silver prices as their standard deviations have declined (see chart below for the standard deviations of the daily percent changes of gold and silver prices during 2011-2012). This finding means that for the time being the volatility isn’t high in the bullion market. 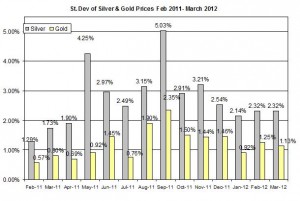 Final U.S GDP 4Q 2011 Estimate: In the recent estimate the U.S GDP in the fourth quarter rose by 3%. This shows a slight increase in the growth rate for the US’s GDP. The current expectations are that the growth rate in the fourth quarter will remain high. if there will be a sharp shift in this estimate it could also affect gold and silver prices (for the previous estimate of US 4Q GDP).

U.S. Jobless Claims Weekly Update: initial claims decreased to 348,000 claims for the week ending on March 17th; the number of insured unemployment declined by 9 thousand to 3,352 thousand during the week of March 10th; the upcoming weekly update may affect the direction of the USD and consequently prices of metals;

Bernanke Speech: The speech is part of four piece lecture series. The title of this speech is “The Federal Reserve and the Financial Crisis” Part 4″;

During March the American stock markets slightly rose. This includes the S&P500 index that rose by nearly 3.5% during the month. As presented in the chart below, the S&P500 index daily changes are strongly and positively correlated with daily changes of gold and silver prices (during March the linear correlation was 0.59 with gold and 0.637 with silver). This finding suggests that if the stock market will continue to rise it may suggest gold and silver prices may increase as well. 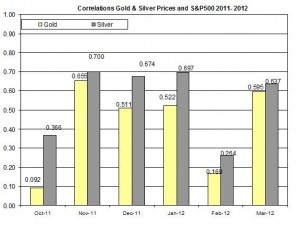 The Euro/USD much like bullion prices didn’t so much during the past couple of days. If the Euro/USD currency pair will continue to slightly decline today then it may also adversely affect gold and silver prices.

Gold and silver prices didn’t do much during the past few days despite their sharp shifts on a daily basis. Today, the EU summit will take place and could have a strong effect on the direction of gold and silver prices via the changes in market sentiment and the Euro. The U.S GDP growth rate report for Q4 2011 will be released. If this estimate will be substantially different from the previous estimates, it could stir up the markets a bit and may even affect forex and commodities prices including precious metals prices. The U.S jobless weekly update may also affect the strength of the US dollar and consequently gold and silver prices.