Gold and silver prices didn’t move in sync yesterday as gold price rose while silver price declined. The U.S. non-farm payroll report which came out on Friday may have had a different effect on bullion prices. But the market’s reaction was mostly in the U.S stock markets that sharply declined. The Indian Jewelers strike is over and physical demand for gold is expected to grow in the weeks to come.  In Europe investors continue to show signs of low confidence as the Euro slides down (the Spanish bond sale didn’t go well). Currently gold and silver prices are rising. Today, Bank of Japan will report on its monetary policy and rate decision.

Here is a short outlook on gold and silver prices for Tuesday, April 10th:

The chart below presents the shifts in gold and silver prices during the month so far (prices are normalized to March 30th). 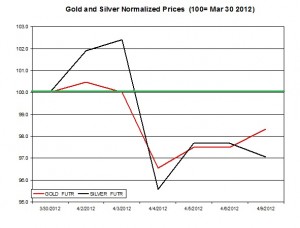 The ratio between gold and silver edged up to 52.15. During the month the ratio rose by 1.32% as gold has slightly outperformed silver. In the chart below are the changes in this ratio during the month (up to date). 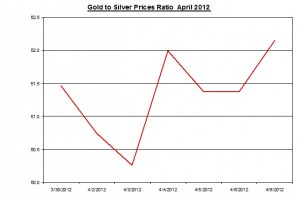 Indian Jewelers Strike is over – Demand for Gold may rise

The major gold news comes from India: the Indian jewelers ended their three week strike because of the decision of Indian government to raise the import tax on gold from 2% to 4%. The Strike ended when the Finance Minster stated he will consider a rollback of the tax. It’s still unclear if the strike won’t resume again and what was the effect of the strike on the demand for gold.

The strike ends at a key time asIndia’s gift giving Akshaya Tritiya festival will be on April 24.Indiais the leading country in importing gold. This news may have rally gold price during today’s trading.

Bank of Japan – Rate Decision and Monetary Policy: Bank ofJapan will decide on its interest rate and monetary policy. Up to now, BOJ left the interest rate unchanged at 0 to 0.1 percent. If the BOJ will introduce monetary stimulus plans, it could affect the Yen and commodities prices ; Japan is among the leading countries in importing commodities;

Gold and silver prices moved in different direction yesterday but their linear correlation is still strong and robust. The effect of the U.S labor report seems to have dominated yesterday’s market reaction. Today the BOJ rate decision may affect the Yen, which in turn might have a moderate effect on other currencies and consequently gold and silver prices. The end of the strike in India may also have a positive effect on bullion prices during today’s trading. On the other hand if the Euro will decline as the market will react to the growing concerns over the Euro Zone’s stability and debt crisis this could have a negative effect on gold and silver prices.