Gold and silver prices started off 2012 with very sharp gains mainly during the first trading day of the year. Since many other financial markets also started 2012 on a positive note including crude oil market and American stock market, this rally may have partly due to the phenomena known as “the January effect”. The positive reports from the U.S. on the U.S. manufacturing PMI may have also contributed to the markets rally at the beginning of the week. But by the end of the week gold and silver prices changed direction and slightly declined on Friday, perhaps due to a market correction and a reaction to the recent U.S. labor report.

Here is a short review of the changes in gold and silver prices during the week of January 2nd to January 6th 2012:

During the week, the average daily percent change of gold price inclined by 0.79%; silver price also rose by an average daily rate of 0.73%.

In the following chart are the silver and gold prices that were normalized to 100 to the end of last week – December 30th. Gold and silver prices had a sharp upward trend mainly during the first half of the week. 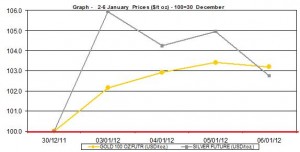 The second chart presents the daily percent changes of silver and gold prices (or in other words the price changes around the trend). Gold and silver prices started off the week with very sharp gains that subsided as the week progressed and by the last day of the week both precious metals prices slightly declined. 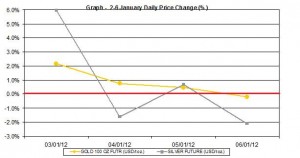