Gold and silver prices continued to recover from the downward trend of December and presented strong numbers during the first couple of weeks of 2012. The ECB’s decision to keep the Euro interest rate unchanged may have helped keep the Euro strong against the US dollar during the week and consequently may have contributed to the rally of gold price and silver price. But by the end of week the announcement of S&P cutting the credit rating of France to AA+ dragged down the Euro along with commodities prices.

Here is a short review of the changes in gold and silver during the week of January 9th to January 13th 2012:

In the following chart is the development of silver and gold prices, which were normalized to 100 to the end of last week – January 6th. Gold and silver prices continued their upward trend during most of the week. 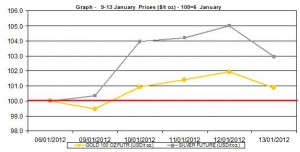 The second chart shows the daily percent changes of silver and gold prices (or in other words the price changes around the trend). Gold and silver prices started off the week rising, but by the end of the week precious metals prices declined. 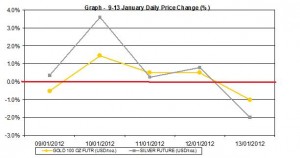