Gold and silver prices took a dive and tumbled down all the way back to their levels in 2011. The lingering effects of the recent FOMC meeting may have had a key role in this turn of events. Will this downward trend continue during the day? Currently gold and silver are traded up. There are many reports to be published today including: U.S. Jobless Claims, U.S. Producer Price Index (update: US PPI rose by 0.4%), U.S. TIC Long Term Purchases, Libor Rate of Swiss National Bank and Philly Fed Manufacturing Index (update: index rose to +12.5).

Here is a short review on gold and silver prices for Thursday, March 15th:

The chart below presented the changes in gold and silver during March (prices are normalized to February 29th). 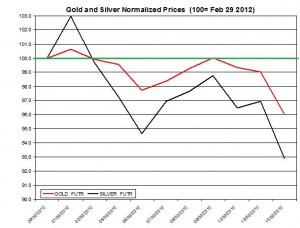 The ratio between gold and silver edged up on Wednesday, and reached 51.05. During the month the ratio rose by 3.34% as gold has outperformed silver. In the chart below are the changes of this ratio during the month. 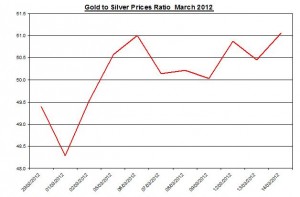 U.S. Jobless Claims Weekly Update: initial claims edged up to 362,000 claims for the week ending on March 3rd; this weekly update may affect the direction of U.S Dollar;

Philly Fed Manufacturing Index: This survey estimates the progress of the U.S manufacturing conditions. In the last survey, the index grew to +10.2 in February 2012. This index, may affect the strength of the U.S Dollar and thus also gold price (the recent Philly Fed review);

U.S. Producer Price Index: This report refers to February 2012. In the recent report regarding January this index for finished goods rose by 0.1% compared with December’s rate; this news may affect the direction of gold and silver prices;

The U.S. 10-year Treasury yield sharply rose on Wednesday by 0.15 percent points to 2.29% – the highest level since October 31st, 2011; during March the 10 year treasury yield increased by 0.31 percent point. This rally in LT securities yields may indicate that the demand for “secure investments” has subsided or on other words the risk appetite in the markets has risen. During March there was a mid-strong negative correlation between the changes in U.S. 10-year Treasury yield and gold price. The chart below shows the development of the U.S. 10 yr yield and gold price during March. The sharp drop in gold price in the past couple of days coincided with the hike in U.S. Treasury yields. Therefore, if the LT U.S. treasury yield will continue to rally, it may indicate that gold price will follow and further decline. 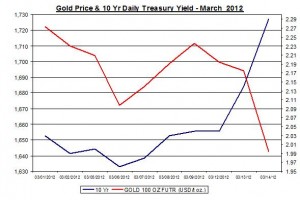 The Euro/U.S Dollar sharply declined on Wednesday at 1.3033. During March Euro/U.S Dollar decreased by 2.2%; further, the Australian dollar and Canadian dollar also depreciated yesterday against the U.S. dollar by 0.71% and 0.04%, respectively. Since these exchange rates are correlated with the daily changes in gold and silver if these currencies will change direction and appreciate against the U.S dollar it may indicate gold and silver will follow and trade up. Currently, the Euro/USD is slightly increasing.

Precious metals prices took a dive during yesterday’s trading. Furthermore, the tumble in gold and silver prices yesterday eliminated all the sharp gains these metals prices had in January 2012. The speculation around another QE3 may have subsided following the recent FOMC meeting. If the upcoming US reports will continue to show good signs of progress (Philly Fed, PPI) and then they may further strengthen the U.S dollar, reduce the chances of another QE3 and consequently may adversely affect gold and silver prices. On the other hand, historically, and all things equal, when gold and silver prices tumble down the next day they usually bounce back. The last time was back in February 29th when gold price declined by 4.31% and the following day it rose by 0.64% (however this may have been also due to the expiry of the option). In any case, I speculate if the U.S. reports won’t show big improvements then bullion prices may rebound from yesterday’s falls.