Gold and silver prices didn’t do much during last week as they have started off with slight gains that were lost by the end of it. I suspect the recent non-farm payroll report, which showed a rise of 243,000 in employment, may have been among the factors to pull down precious metals prices on Friday. This report may have cooled down the speculative mode the metals market has been during January especially following the recent FOMC decision to keep rates low until 2014.

Here is a short summary of the development of gold and silver prices during the week of January 30th to February 3rd 2012:

In the following chart are the developments of silver and gold prices, which were normalized to 100 to the end of last week – January 27th. Gold and silver prices didn’t do much on a weekly scale. 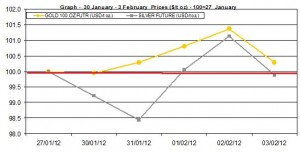 The second chart demonstrates the daily percent changes of gold and silver (or in other words the fluctuations around the trend). Gold and silver prices started off the week with small changes; on Wednesday and Thursday silver price started to pick up and rise, while gold only moderately increased. But by the end of the week both metals were traded down. 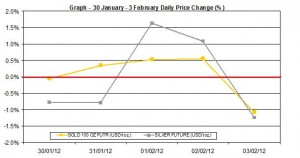