There were high expectations in the gold and silver markets for this week’s FOMC meeting that eventually didn’t have any apparent effect on precious metals prices. Thus quoting T.S Eliot: “This is the way the world ends; Not with a bang but a whimper”.

The FOMC kept the policy unchanged but also didn’t take off the table the possibility of another stimulus plan in the future. Following this news, gold and silver prices only slightly declined and didn’t tumble down as was the case in the previous FOMC meeting.  The recent U.S GDP estimate for the first quarter of 2012 didn’t hit expectations, even though it is still a good result. This news may have slightly affected bullion to trade up on Friday. The S&P’s announcement to downgrade Spain’s credit rating and also to criticize the EU handling the debt crisis also didn’t seem to have much of an effect on the forex or commodities markets during last week. In the past three weeks gold price remained in the $1630-$1680 range and it seems that the recent news and events don’t have much of an effect on gold to push it out of this range. The same could be said for silver.

Here is a short summary of the changes in gold and silver prices between April 23rd and April 27th 2012:

During last week, the average daily percent change of gold price rose by 0.27%; silver price edged down by an average daily rate of 0.17%.

In the following chart are the developments of gold and silver prices, which were normalized to 100 to the end of the previous week – April 20th. Gold price had a slow paced upward trend during most of the week, while silver sharply declined at the beginning of the week and didn’t recover from it during the rest of the week. 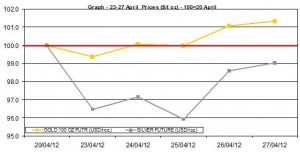 The second chart shows the daily percent shifts of gold and silver (or in other words the shifts around the trend). Gold and silver prices zigzagged during the first few days of the week from gains to losses; during Thursday and Friday both precious metals traded up; their daily percent changes ranged between nearly 3% gain and 3.5% loss. 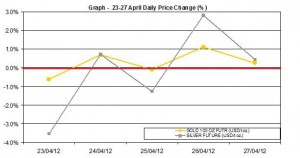