Gold and silver prices start the week strong and may further advance as the Greek debt is still affecting the Euro on the one hand, and the concerns over the progress of the US economy is affecting the US dollar.  Let’s analyze the precious metals market for today, June 7th:

Silver price also inclined following the falls it had during last week; yesterday it inclined by 1.63% to $36.78.

During June, gold price increased by 0.7%, while silver price declined by 4.0%.

In the chart below are the normalized silver and gold prices (May 31st 2011=100): it shows the fall which followed with a steady rise of silver prices; gold price on the other hand moderately inclined during June (up to date) most of the time. 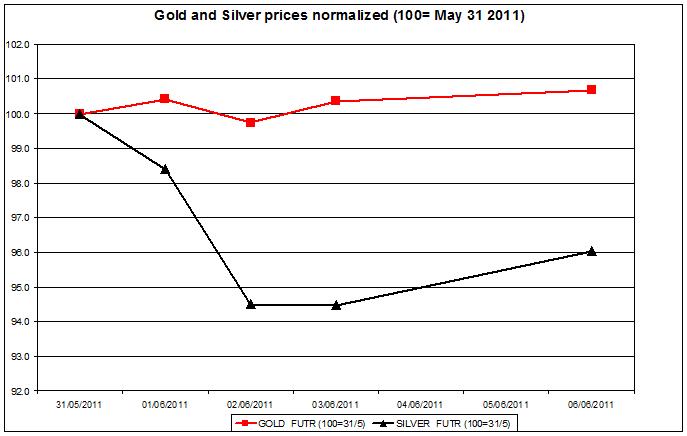 The gold to silver ratio: As of Monday, June 6th the ratio between gold and silver prices inclined to 42.06. The ratio trend is still upward as silver price has underperformed compared with gold price during most of time in the past few weeks.

The chart below shows the recent changes of this ratio since March up to June 6th 2011. 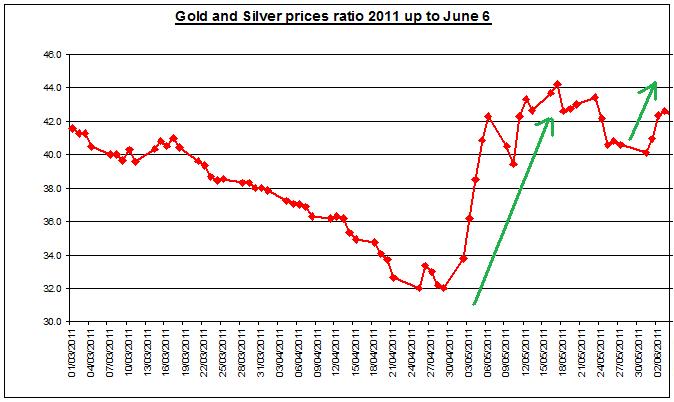 US Dollar and Gold and silver prices – June update

On Monday June 6th, the US dollar appreciated compared with major currencies including Euros to USD and USD and Canadian dollar exchange rates by 0.40% and 0.32%, respectively.

These are very moderate changes that might not mean much only noise around the trend. Furthermore, this strengthening of the US dollar doesn’t coincide with the correlations it demonstrated with gold and silver prices during May.

Ben Bernanke is set to speak today about the economic outlook of the US economy. Following the recent publications of the economic indicators (PMI, Labor report GDP etc) showing the US economy isn’t recovering from its slowdown, it will be interesting to see what will Bernanke say in his speech, and whether he will tip his hand as to what is next for the Fed once the recent quantitative easing plan will end this month.

The speculation around the Greek debt continue to be high and the time is factor that doesn’t work well for Greece seeing that it’s expected that without re-planning its debt it may run out of money by July. According to Bloomberg, the European Central Bank President Jean- Claude Trichet signals that he is for taking measures to encourage investors to buy New Greek bonds and replace the old ones. This news regarding the Greek debt will continue to affect the strength of the Euro compared with other major currencies and could also further affect the changes in gold and silver prices.

The precious metals prices are currently traded with moderate changes in the Asian markets:

The current ratio of gold to silver prices is at 41.84.

Gold price inclined during June (up to yesterday) by 0.7%, while silver price fell by 4%, mostly due to its decline at the first couple of days on June.

The current situation in the U.S. and Europe draw most of the financial community’s attention as the two economies are trying to get over their recession and debt problems.

Today’s speech by Bernanke might indicate what’s the next move of the Fed, which might drive US dollar’s value down and if so, might push back gold and silver prices back up. On the other hand,

In the mean time, I still speculate that gold and silver prices will maintain their current price level until a new development will occur in the financial markets.