Let’s examine the news and events that might affect current gold and silver prices as of April 6th:

Bank of China raise its basic interest rate by 25 basis points to 6.31%. This is the second interest rate raise this year. This decision was taken to slow down China’s growing inflation, which as of February 2011 reached 4.9% annual rate.

China is the second largest consumer of gold after India; China’s jewellery demand reached a new annual record of 400 tons, and its annual demand for bars and coins totaled 179.9 tons – an increase of 70% (Y-2-Y).

The recent rise in interest rate might adversely affect its demand for precious metals, such as gold and silver. If it will have such an affect, it will be felt in the upcoming months.

The fights between the rebels and Gaddafi’s army progresses and even with NATO’s intervention the fights don’t subside.

This turmoil raises the instability in the Middle East and adversely affects the market of commodities and precious metals.

See here for more news and updates about the turmoil in the Middle East and its affect on commodities’ markets.

The month of April started off with rises for gold and silver prices. During March silver prices rose by over 10% while gold prices didn’t do much.

In the chart below are the changes of gold prices during 2011; the chart shows that gold prices bounced back from its decline during January. 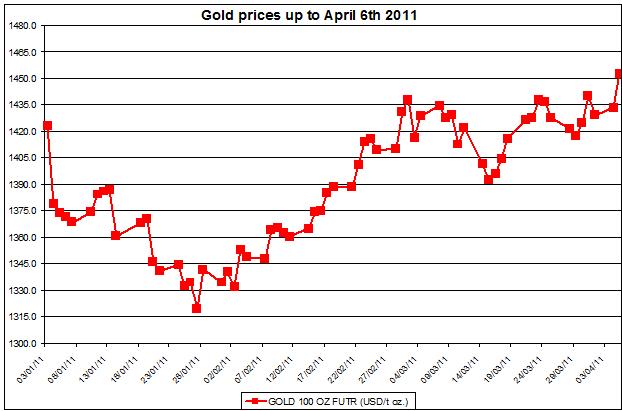 The gold to silver ratio: as of yesterday, April 5th the ratio between gold and silver prices declined to 37.07 – the lowest level this month so far.

As seen in the graph below, the ratio of gold to silver prices continue to drop as silver prices increase by a higher rate than gold prices do. 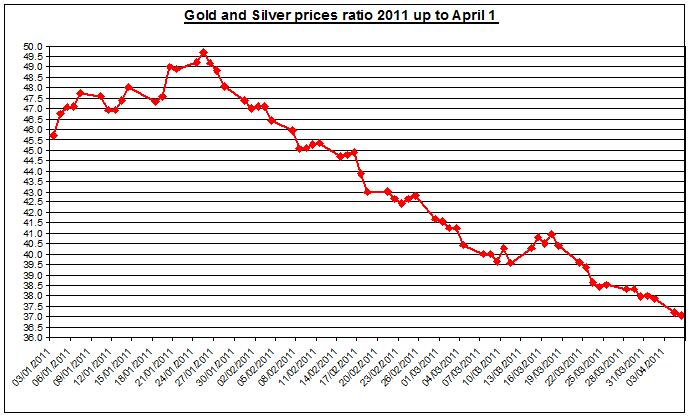 The current ratio of gold to silver prices is at 37.72.

The recent decision of China to raise its interest rate, might adversely affect the precious metals market, and might curb the rally of gold and silver prices. This affect, however, might only be seen in the future, if this decision will affect China’s demand for commodities.

In the mean time, I still speculate that gold prices will continue to moderately rise as the week will progress. The same goes for silver prices.

Here is a reminder of the top news and reports that are published today and tomorrow (all times GMT):

14.30 – Australian Bureau of Stat. will publish the unemployment rate