2010 is over, and this post is the third and final review, as part of my series on 2010 analysis and 2011 outlook of major commodities; after covering the natural gas market and the crude oil market, this last review will cover gold. In particular, I will analyze the spot gold price and the interaction between the gold supply and demand during 2010. Finally, I will present an outlook for gold prices in 2011.

It’s well known that many investors and traders fell back heavily on gold since the recession in the U.S. commenced during 2008. Many still consider gold a safe heaven when uncertainty in major markets rises.

During 2010, there were a couple of new items that most likely only further influenced investors to hold on tight to their gold:

This news could imply correlation among gold prices and major currencies, as it’s a known paradigm that people run away from the US dollar as it weakens to buy gold.

So, how did the spot gold price relate to major currencies?

In the following chart are the correlations among major currencies, WTI crude oil price and spot gold price in 2010. The data are based on monthly percent changes. Since each correlation relies on merely 12 samples (12 months), the results are not too robust; however I think they could be enough to point us to the right direction. 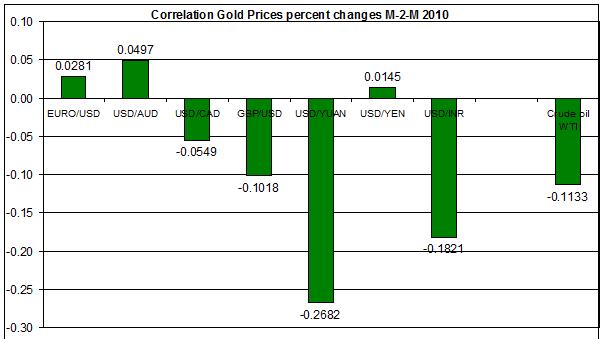 The chart shows that spot gold price wasn’t too correlated to most currencies,  nor to WTI crude oil.

The only currencies that stand out were USD/ Yuan (Chinese Yuan) with a -0.26, and USD/INR (Indian Rupee) with a -0.18. This means as the Yuan or INR strengthen against the US dollar the spot gold price increased.

India and China are the driving force in the rise in demand for gold in Asia. These countries, along with Turkey and Russia, account for 63% of the total global demand in 3Q2009. Therefore, it’s no surprise to see strong correlation among these currencies and gold prices. The role of China and India will be important in 2011 as they are major players in driving higher the demand for gold.

Let’s check how the gold market performed from perspective of supply and demand in 2010 compare to 2009:

The supply is estimated to peak in the last quarter of 2010, while in 2009 the supply peaked during the first quarter.

In conclusion, there wasn’t a shortage in supply for gold, since in every quarter, the supply toped the demand. Nor is there any apparent trend (up or down) in the demand for gold.

During the time the supply was higher than the demand, gold prices increased, as expected, in every quarter very sharply with no apparent relation to the demand and supply shifts.

Could the rising prices be a matter of inflation? I.e. the prices of most commodities rose and therefore the relative price of gold didn’t change much. Perhaps, however, I don’t know of any high inflation that we have recently suffered from in the Western world (e.g. Crude oil prices and natural gas prices aren’t higher then they were a few years back).

Let’s break down the factors which could affect the gold market in 2011 into their two main components: gold as an investment, and as a commodity:

Gold as an investment: The above mentioned news items about the U.S. and Europe are among the news items that could further weaken major currencies in 2011, and will probably influence investors into holding their gold, and as a result, could further drive up gold prices. If there will be, on the other hand, improving news on the U.S. getting out of its recession, it could help gain back the trust of investors to go back and invest in the U.S.

Gold as a commodity: China and India are two of the major countries that led the growth in their demand for gold mainly for in the Jewelry & Industrial sectors in 2010. Should we expect these countries to perform the same in 2011? Maybe, however consider that China is having inflation problems and is determined to fight it, which could slowdown its economic growth; consequentially this slowdown could have adverse effects on the demand for gold.

The bottom line is that gold price will NOT decrease dramatically in 2011, and could continue to rise; if so, it will probably slow down its growth rate, i.e. increase moderately than it did in the last couple of years.

In any case I think it will be an interesting year for gold.