Gold and silver prices tumbled down along with other commodities prices such as oil and U.S stock markets. Even the Euro/USD plummeted during yesterday. The FOMC’s decision to extend its operation twist by $267 billion until the end of the year and not to introduce another QE program is likely to be among the factors to drag down bullion rates. Further, the Fed updated down its projection of U.S GDP growth from a range of 2.4-2.9 to 1.9-24 for 2012 and for 2013 the projection was cut from 2.7-3.1 to 2.2-2.8. This also may have also contributed to the decline of U.S stock markets and commodities prices that are strongly correlated with precious metals prices. U.S jobless claims edged down by 2,000 during last week; the Philly Fed index plunged to -16.6 in June; U.S existing home sales declined by 1.5% in May. Moody’s downgraded 15 of the world’s largest banks. These banks include names such as Bank of America, Morgan Stanley and Credit Swiss. Currently gold and silver are rising. On today’s agenda: German Business Climate Survey, European Council Meeting and Canada’s Core CPI.

Here is a short analysis for gold and silver for Friday, June 22nd:

The chart below presents the normalized rates of these precious metals during June (normalized to 100 as of May 31st). The chart shows how both gold and silver tumbled down and eliminated their rally from the first three weeks of June. 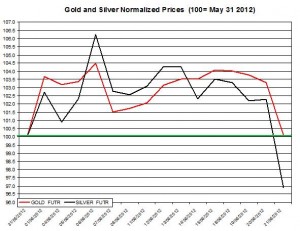 The ratio between the two metals sharply rose on Thursday to 58.2. During the month the ratio rose by 3.27% as silver has slightly under-performed gold. 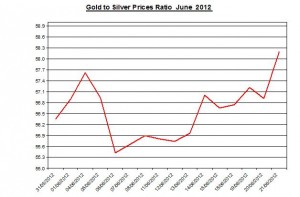 According to the recent weekly report, the number of initial claims declined during the week ending on June 16th by 2k and settled at 387,000 claims (seasonally adjusted data), which is higher than the revised figure of 389k claims from last week.

According to the recent Philly Fed Manufacturing survey for June the Philly Fed index fell from -5.8 in May to -16.6 in June. Indexes of prices also declined that may suggest the price pressures were moderated. This news may have contributed to the decline in commodities and stock prices.

The U.S real estate market continue to dwindle as it was reported yesterday that the U.S. existing homes sales rate declined during May 2012 by 1.5% (M-o-M); this news comes after it was reported last week that there was a sharp drop in housing starts during May.

German Business Climate Survey: In the recent report for  May 2012, the business climate index fell from 109.9 in April to 106.9 in May; if this trend will continue, it might adversely affect the Euro;

Canada’s Core CPI: According to the Canadian CPI report for April 2012, the CPI rose by 2% during the past 12 month up to April – this is a slightly higher rate than in March; the core CPI excluding food and energy rose by 2.1% from April 2011 to April 2012. This report might affect the direction of Canadian dollar, which is also strongly correlated with bullion prices;

The Euro/US Dollar fell on Thursday by 1.31% to 1.254. During the month (UTD) the Euro/U.S Dollar increased by 1.41%. Furthermore, other exchange rates including the Aussie dollar and CAD also sharply depreciated during Thursday against the USD by 1.57% and 1.13%, respectively. The sharp fall in Euro and Aussie dollar coincided with the plunge in gold and silver prices. If the U.S dollar will continue to rise against these currencies, it may pressure down bullion rates. Currently the Euro is declining against the USD.

Current Gold and Silver Rates as of June 22nd

Gold and silver tumbled down yesterday after the FOMC didn’t come through with another QE program. The sharp fall of commodities and stocks during yesterday may have also contributed to the downfall of bullion. These falls came after the Fed revised down its projections and the disappointing U.S reports including Philly Fed and existing home sales . I speculate bullion will continue to dwindle and shift from gains to losses with little movement especially after such a turbulent day. If the EU council meeting will come up with some headlines it could affect not only Euro but also precious metals.