Gold and silver ended on a positive note and may continue throughout the first day of the week. According the results of the recent Greek elections the  Pro-bailout parties won and will try to form a coalition. This news eases the concerns (for now) of Greece exiting the EU. Currently gold and silver are decreasing. On today’s agenda: G20 Meeting and the minutes of Australia’s Bank Monetary Policy recent Meeting.

Here is a short analysis for gold and silver for Monday, June 18th:

The chart below presents the normalized rates of these precious metals during the month (normalized to 100 as of May 31st). 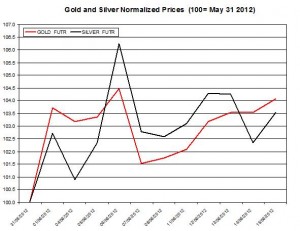 The ratio between the two metals decreased on Friday to 56.65. During the month the ratio rose by .53% as silver has slightly under-performed gold. 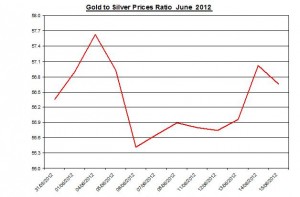 G20 Meeting: the G20 will convene in order to talk over the recent economic developments in the world including the EU debt crisis;

Monetary Policy Meeting Australia’s Bank: The minutes of the monetary policy meeting of the reserve bank of Australia presents the main factors that affected the board’s decision to keep the basic interest rate at 3.75%; the minutes of this meeting may affect the Aussie dollar and consequently bullion rates;

The Euro/US Dollar edged up on Friday by 0.04% to 1.2638. During the month (UTD) the Euro/U.S Dollar increased by 2.2%. Furthermore, other exchange rates including the Aussie dollar and Canadian dollar also appreciated during Friday against the USD by 0.51% and 0.08%, respectively. If the U.S dollar will further depreciate against these currencies, it may help pull up bullion rates. Currently the Euro is rising against the USD.

Current Gold and Silver Rates as of June 18th

Gold and silver may start off the week strong if the Greek election will result in the pro-bailout parties winning. This news may curb the concerns of a Greek exit and thus trade up Euro/USD. The speculation around another QE program to be announced by the Fed may keep bullion rate rising in the next couple of days.