Gold and silver didn’t do much yesterday as gold price slightly rose and silver edged down. The mixed trend of major currencies during yesterday’s trading may have contributed to the mixed trend in the bullion market. The U.S PPI sharply fell by 1% mainly due to the drop in energy prices. The U.S PPI ex food & energy edged by 0.2%; this news tends to be negatively linked with gold; U.S retail sales edged down by 0.2%. The American and German bond auctions went well yesterday. Spain’s 10 year bond yields to nearly 6.9% after Moody’s rate cut.  Italy’s yields also rise before its bond sale. Currently gold is rising. On today’s agenda: U.S. CPI, jobless claims weekly update, Governor King will give a speech, ECB monthly bulletin, Bank of Japan and Swiss National Bank rate decisions.

Here is a short analysis for gold and silver for Thursday, June 14th:

The chart below presents the normalized rates of these precious metals during the month (normalized to 100 as of May 31st). 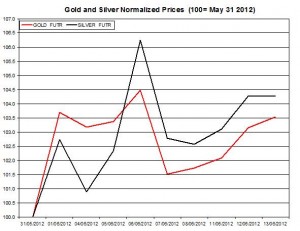 The ratio between the two metals rose on Wednesday to 55.96. During the month the ratio slipped by 0.71% as silver has slightly out-performed gold. 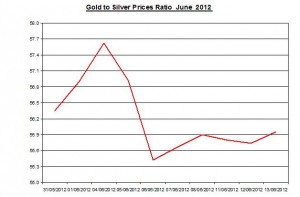 U.S Retail Sales Edged Down in May

According to the recent report the U.S. retail and food sales declined by 0.2% and reached $404.6 billion in May. This means the total retails sales didn’t change much but still edged down.  If this trend will continue, it could signal a slowdown in the U.S economy and thus may adversely affect commodities prices.

U.S. Producer Price Index Fell by 1% in May

According to the latest producer price index report, the U.S PPI for finished goods declined by 1% in May compared with April’s index. During the month the food index declined by 0.6% and the energy index tumbled down by 4.3%. On the other hand, the Producer Price index excluding food and energy edged up again by 0.2% during May 2012.

U.S Core CPI: According to the U.S Bureau of Labor statistics during April 2012, the core CPI remained unchanged (M-o-M) and the index increased over the last 12 months by 2.3%; the core CPI rose last month by 0.2%;

Bank of Japan –Monetary Policy Statement: Up to now, BOJ kept the interest rate unchanged at 0 to 0.1 percent. If the BOJ will introduce a new monetary stimulus plan, it might affect the Yen, other exchange rates and commodities prices;

ECB Monthly Bulletin: This monthly report for May 2012 examines the economic situation of the Euro Area including price stability, interest rate decisions and government’s debt;

Euro Area Annual Inflation (May): the inflation in Euro Area reached 2.4% in May (flash report), i.e. it continued to decline. If the upcoming inflation rate estimate will confirm the flash report’s figure, it may raise the chances of another ECB interest rate reduction in the future ECB rate decision;

Governor King speaks: The governor of Bank of England will speak in a press conference and his speech could offer some insight in regards to the recent BOE interest rate decision and monetary policy; this speech may affect the British Pound trading;

The Euro/US Dollar rose on Wednesday by 0.42% to 1.2557. During the month (UTD) the Euro/U.S Dollar increased by 1.54%. Alternatively, other exchange rates such as the Aussie dollar and Canadian dollar depreciated during Wednesday against the USD by 0.25% and 0.37%, respectively. If the U.S dollar will depreciate against these currencies, it may help rally bullion rates. Currently the Euro is increasing against the USD.

Current Gold and Silver Rates as of June 14th

Gold traded up for the fourth consecutive day; the recent rally in Euro/USD could have helped pull up the yellow metal. Nonetheless gold price remains in the $1550-$1650 range and silver in $27-$29.

I think bullion rates won’t break from this range during the rest of the week. The upcoming auctions might indicate the level of confidence traders have in the EU. The upcoming U.S reports including jobless claims, and core CPI might affect the US dollar and consequently gold and silver. If there will be big headlines from BOJ or SNB vis-à-vis its respective rate decision it could stir up the forex and commodities markets.