Gold and silver prices sharply increased yesterday along with other commodities such as crude oil and major foreign exchange rates including the Euro and Aussie dollar. Yesterday it was reported the Australian GDP expanded by a higher than expected rate. This news positively affected not only the Aussie dollar but also precious metals. The ECB kept the interest rate unchanged. Currently gold and silver are falling. Bernanke will testify before the Senate. Update: Bernanke stated in his testimony that economic conditions are improving;  U.S labor market isn’t in such a bad condition as many had claimed; there is growing concerns for the debt crisis in Europe; he didn’t refer to any additional steps the Fed might consider. This means we could see a sharp fall in bullion rates today.  There are additional items on today’s agenda including: U.S Jobless Claims (Update: jobless claims fell to 377k), BOE will announce its decision on the interest rate, Japan Current Account, Australian Trade Balance, French 10 Year Bond Auction and Swiss National Bank Forex Reserves. Update: China cut interest rates for the first time since 2008. This news might positively affect commodities prices.

Here is a short analysis for gold and silver for Thursday, June 7th:

The chart below presents the normalized rates of these metals during the past couple of weeks (normalized to 100 as of May 15th). It shows that both metals rates reached a similar price rise in the past three weeks. 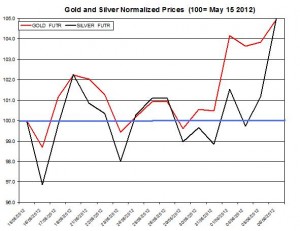 The ratio between the two metals tumbled down on Wednesday to 55.42. During the month the ratio fell by 1.66% as silver has slightly out-performed gold. 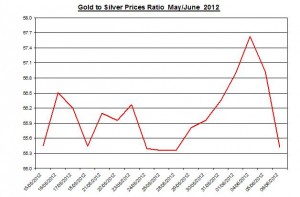 As expected Mario Draghi left the rate unchanged at 1%; this rate decision may have positively affected the Euro/USD and consequently may have also helped rally precious metals during yesterday.

The number of employed increased by 38,900 people in May compared to April. On the other hand the rate of unemployment edged up to 5.1%. This news is likely to pull up the Australian dollar which is positively correlated with precious metals rates (see here the recent report).

Bernanke’s Testimony: This will likely be the main event of the day. Following the recent disappointing U.S employment report, more people think this will trigger the Fed to lean towards another stimulus plan. Bernanke will testify before the Joint Economic Committee in the U.S Senate. The title of his speech is “Economic Outlook and Policy”; if Bernanke will consider the recent U.S economic developments as a turn for the worst, it could signal that the Fed might consider another monetary intervention; in such a case it could pressure up bullion rates. If the testimony won’t present any new developments in the Fed’s perspective or its monetary policy, then this could be just another storm in a teacup.

Great Britain Bank Rate Decision: Bank of England will decide on its basic rate for June 2012 and the progress of its asset purchase plan; as of May the BOE’s rate was still unchanged at 0.5% and the asset purchase plan of £325 billion continues; I think the Bank will keep the rate unchanged;

U.S. Jobless Claims Weekly Report:  in the latest update the jobless claims rose by 10k to 383,000; this upcoming weekly report may affect the U.S dollar and consequently bullion rates;

Swiss National Bank Forex Reserves: the central bank of Switzerland will release the total value of its foreign currencies reserves during May;

French 10 Year Bond Auction: the French government will issue another bond auction; in the previous bond auction, which was held at the beginning of May, the rate reached 2.96%;

Japan Current Account: this may affect the strength of the Japanese Yen;

Australian Trade Balance: In the previous update, the seasonally adjusted balance of goods and services expanded from a deficit of $754 million in February 2012 to a $1,587 million deficit in March 2012. The export of non-monetary gold rose by $75 million (6%); if gold exports will continue to rise April, it might suggest a rise in demand for non-monetary gold (see here last report);

The Euro/US Dollar spiked yesterday by 1.03% to 1.2581. The decision of ECB to keep rates unchanged and the speculations around the possibility of Germany agreeing to Euro bonds may have also contributed to the rally of Euro/USD. During the month (UTD) the Euro/U.S Dollar increased by 1.74%. Furthermore, other exchange rates such as the Aussie dollar and Canadian dollar also sharply appreciated during Wednesday against the USD by 1.9% and 1.02%, respectively. For the Australian dollar, the higher than expected growth rate of its GDP in Q1 may have also helped it rally.  If the U.S dollar will continue to depreciate against these currencies, it may further push up bullion rates. Currently the Euro is falling against the USD.

Current Gold and Silver Prices as of June 7th

Bullion prices rose for the second consecutive day and if the Euro and Aussie dollar will continue to rally this trend might continue throughout the day. The upcoming testimony of Bernanke might also affect the USD and bullion if he will bring some new headlines. If there will be additional hints of a possibility of another stimulus plan, it could pressure up gold and silver. Otherwise bullion traders won’t be influenced from his speech. If the US jobless claims will show sharp shifts, it could also affect not only the US dollar but also precious metals.