Precious metals prices continued to present an unclear trend during most of the month. The fall and rise of Euro/USD coincided with the movement of precious metals prices. Will this unclear trend continue in August? The main events of the month will continue to be around the FOMC and the EU debt crisis: the FOMC will convene during the first week of August and the minutes of the meeting will be published at August 22nd. The ECB will announce its interest rates and might even consider additional steps to resolve the debt crisis in Spain, Italy and Greece are facing.

Let’s examine the bullion market for July and provide a short forecast for gold and silver prices for August 2012.

Gold and silver rates continued to demonstrate an unclear trend during most of July, even though by the end of the month both precious metals have managed to rally along with the rest of the commodities markets. During the month, gold rose by 1.15%; silver, unlike gold, edged down by 0.41%.

Let’s divide July into two parts: the table above divides the month at July 13th; I divide the month at that day because that was after the renewed speculation of additional stimulus plans in the near future by the major economies including China, U.S and EU; during the first part of July, gold declined by 0.8% and silver price by 0.9%. During the second part of July, silver rose by 1.9% and gold price by 0.5%. 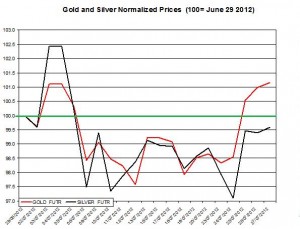 The chart above shows the developments of gold and silver prices during July, in which the prices are normalized to 100 on June 29th 2012.

The next chart presents the changes in the ratio of gold to silver (gold price/silver price) during July; the ratio had a moderate upward trend mainly during the last couple of weeks. The ratio rose as gold price has out-performed silver price. In the last week of July the ratio ranged between 58 and 59. 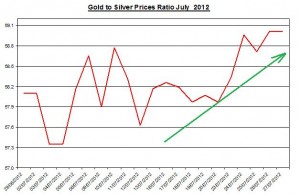 Here are several factors that may have contributed to the decline of gold and silver prices during July:

Here are several factors that may have contributed to the rise of gold and silver during the month:

In conclusion, I speculate gold and silver will resume their downward trend especially if the ECB and FOMC won’t announce of any additional plans to stimulate each respective economy. The U.S economy might continue dwindling which could adversely affect bullion rates via the decline in U.S stocks, commodities prices and LT yields. The upcoming U.S labor report could have some impact on the bullion market. On the other hand, the renewed ease over the EU debt crisis might pull up the Euro which is strongly and positively linked with precious metals prices. The upcoming FOMC meeting and the minutes of the meeting aren’t likely to do much worse to gold and silver than the previous FOMC meeting had already done. I suspect all these items mount up to bullion trading down but not by much. If major currencies including Euro and Aussie dollar will trade up against the USD, then this could curb the decline in bullion rates. Finally, as long as the FOMC won’t announce of another QE program I suspect bullion rates will remain in their respective ranges.