Gold and silver prices kept on rising during last week, and they continue to do so at this week. Today, the US TIC long term purchases report will be published; the Australian bank will make its decision on the overnight rate.

Let’s examine the news of the day related to the precious metals market for today July 18th:

During July, gold price increased by 5.5%, and silver price inclined by 9.5%. 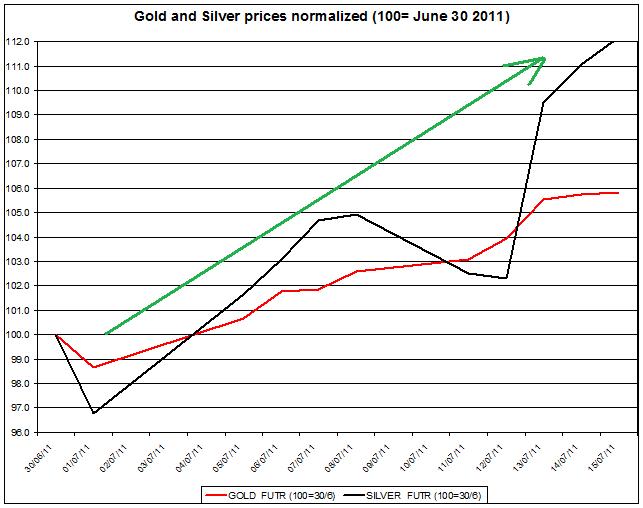 The gold to silver ratio: the ratio between gold and silver prices shifted direction again and has experienced a downward trend in the last few day as it reached on Friday, July 15th 40.70 – its lowest level since May 31st, as silver price is starting to outperform gold price; during July this ratio declined by 5.7%. 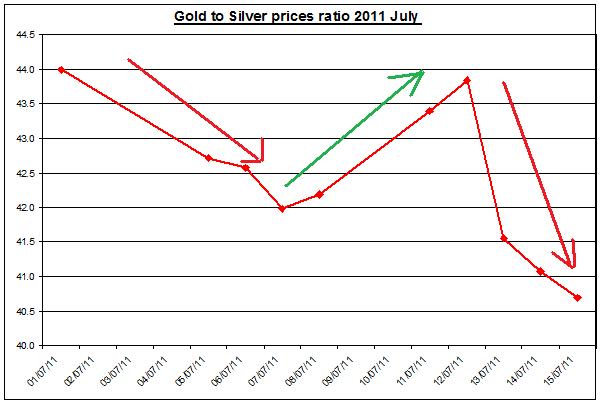 The debt concerns in Europe continue to affect traders as the Euro continues to depreciate against major other currencies. The European Central Bank President said that the concerns over the European debt will continue until Europe will act determinedly to overcome this matter.

He also said that ECB won’t accept government bonds as collateral in case a country will reach default:

“ If a country defaults, we can no longer accept as normal eligible collateral defaulted bonds issued by the government of that country. Because, in the eyes of the Governing Council, this would impair our ability to be an anchor of confidence and stability.”

The US government will need to decide on raising the debt ceiling by the beginning of August; it’s mostly likely to be passed in the next couple of weeks, but in the mean time the internet continues to explore this issue. Moody’s rating agency even went one step further and suggested the United States to eliminate its statutory limit on government debt in order to reduce uncertainty among bond holders.

The Treasury International Capital presents the main changes in the purchases and sales of US long term treasuries during May 2011. In the April report, the net foreign purchases reached $30.6 billion; the increase in purchases was mainly driven by China. In the upcoming report there might continue to be a rise in purchases (see here my last review of April 2011). If this will be the case, it might bring some confidence and reassurance to the US dollar.

During June, the EURO, AUD and CAD to US dollar exchange rates were highly positively correlated with the daily percent changes of gold and silver prices. The Euro to US dollar exchange rate fell during July by 2.4%, and on Friday it rose by 0.11%  If today the US dollar will depreciate against major currencies including Australian dollar and Canadian dollar, this might further push gold and silver prices up.

The current ratio of gold to silver prices is at 39.95.

Gold and silver prices continue to rise as they did during last week. For gold price the longest streak it had in rising was back in April as it rose for eight consecutive business days (between April 13th and April 25th), which makes the current streak the longest one in 2011 so far. The concerns over the US debt ceiling on the one hand and the European debt on the other are probably among the reasons for this recent rally in bullion metal’s prices. Therefore I think that gold and silver prices will moderate change today, but will likely to continue their upward trend in the following days.