Gold and silver prices decreased for the third consecutive business day. The recent news from Europe of the unemployment rising to 10.9% didn’t help the Euro. Today’s ECB rate decision might play a role in the foreign exchange and commodities markets. The ADP projects the U.S employment expanded by 119k during April. If tomorrow’s U.S non-farm report will show a similar result it may adversely affect the U.S dollar and consequently may help pull up bullion.  Currently precious metals are trading down. Additional items on today’s agenda: U.S. ISM Non-Manufacturing PMI and U.S. Jobless Claims Weekly Report (update: jobless claims declined to 365k).

Here is a short analysis for precious metals prices for Thursday, May 3rd:

In the chart below are the normalized prices of precious metals during the past several weeks (rates are normalized to 100 as of April 13th). 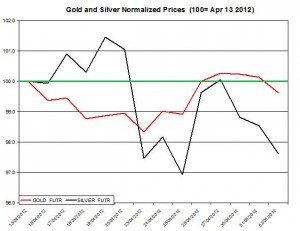 The ratio between these metals increased to 53.97. During the week the ratio rose by 1.83% as gold has slightly outperformed silver during the week. In the chart below is the development of this ratio during April and May. 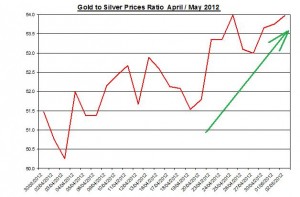 U.S. Jobless Claims Weekly Report:  in the previous update the jobless claims slipped to 388,000; this upcoming weekly report may affect the direction of the U.S dollar and consequently bullion prices;

ECB Rate Decision: during April the Euro Area inflation slipped to an annual rate of 2.6%, but the EU unemployment edged up again to 10.9%;the EU GDP in the Q4 2011 contracted by 0.3% . These figures demonstrate the EU economy isn’t getting any better. In the upcoming rate decision, ECB might consider introducing additional monetary easing  (LTRO) or perhaps an interest rate reduction; if the ECB will make a move, it may affect the Euro to US dollar currencies pairs;

The Euro/U.S Dollar declined on Wednesday by 0.58% to 1.3158; furthermore, the Canadian dollar also depreciated on Wednesday against the U.S. dollar by 0.1%. The chart below presents the linear correlation between bullion prices and selected currencies pairs during April and May. Since the Euro, Aussie dollar and Canadian dollar are strongly and positively correlated with metals prices, if the U.S dollar will continue to appreciate against these exchange rates; this may adversely affect gold and silver . 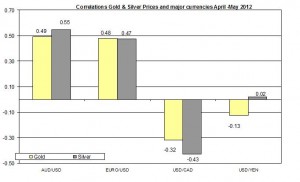 Current Bullion Rates as of May 3rd

Daily Outlook and Analysis for May 3rd

Gold and silver continued their slow paced downward trend and this may continue today if the ECB will keep its policy and interest rate unchanged. If the upcoming U.S reports including non-manufacturing PMI and jobless claims will show progress in the U.S economy this may also help strengthen the U.S dollar and consequently moderately affect the direction of gold and silver prices.

Here is a reminder of the top events and reports that are planned for today and tomorrow (all times GMT):