The month of April finished with gold and silver prices finishing with rises, even though they have started the week with declines.

By the end of the week, gold prices reached 1,556$/t. oz while silver prices finished at 48.599$/t. oz the highest price level for silver in over twenty years.

The recent rises in gold and silver prices during the second half of the week might be related to the rekindled enthusiasm of speculators in the precious metals market because of the slow recovery of the US economy.

This includes the recent first quarter report about the US economy’s 1.8% growth rate of its GDP; the S&P rating downgrade of US credit, and the news about the Federal Reserve’s plan to complete its stimulus plan of 600 billion USD bond purchasing by June 2011, and will maintain the current low basic interest rates level (at 0-0.25%).

Let’s see what these two precious and very desirable metals did last week between 25th and 29th of April:

The following table summarizes the main descriptive data of silver and gold prices:

During April gold price rose by 8.9%, and silver prices increased by 28.8%, which is much higher than the rate silver and gold prices inclined during March, with 10.1% and 0.6% increases, respectively.

In the chart below are the silver and gold prices that were normalized to 100 to the price at the beginning of the week – April, 25th. It shows the trend of these precious metals prices. 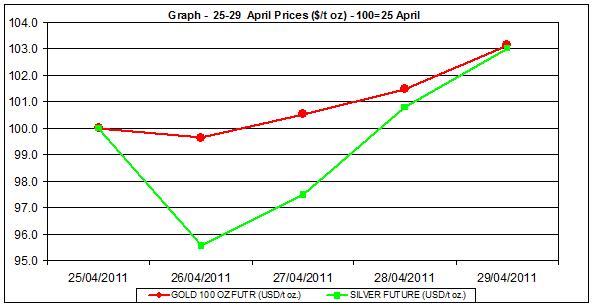 The graph shows how silver prices started off the week with much steeper declines than gold prices did, but by the end of the week they have both finished at nearly the same cumulative percent change.

In the last chart are the daily percent changes of silver and gold prices during last week (the changes around the trend). It shows how gold prices didn’t fluctuate as much as silver prices did during the week. 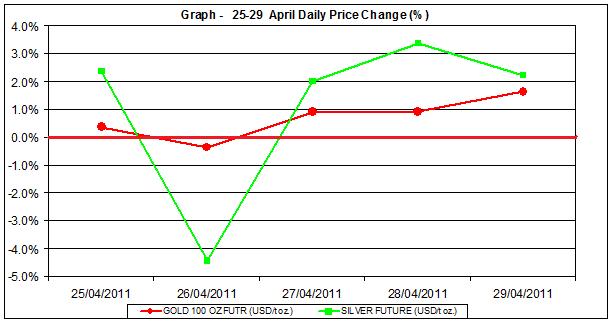