Gold and silver prices started the week with falls, but will these price falls will continue? Currently gold prices are traded up; there are ample news today related that could stir the financial markets including, among others, the BOJ rate decision and US PPI; let’s examine the news of the day and analyze the precious metals market for June 14th:

During June, gold price decreased by 1.4%, while silver price declined by 9.3%.

The chart below presents the normalized gold and silver prices (May 31st 2011=100) and their changes during June. 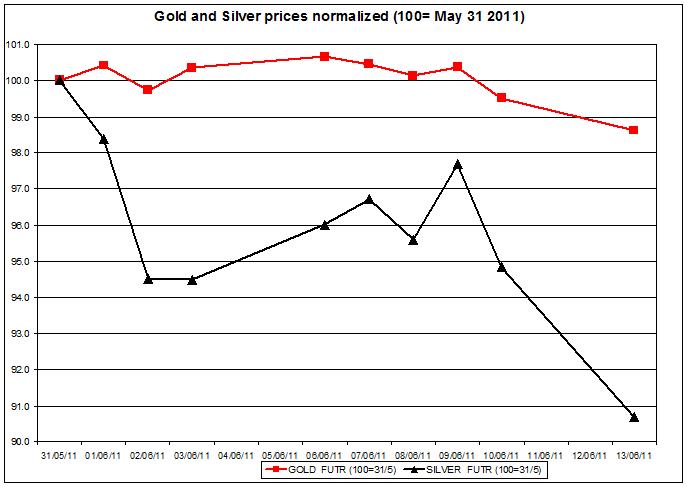 The gold price in 2011 showed rises and falls, and despite the sharp fall during January and the recent downward trend of gold price in recent days, there was a general upward trend for gold price during most of the 2011. 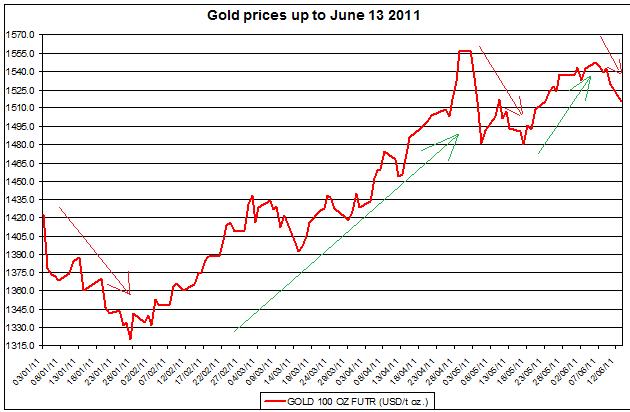 The gold to silver ratio: As of Monday, June 13th the ratio between gold and silver prices inclined by 43.63, and during June this ratio inclined by 8.8%.

The chart below shows the fluctuations of this ratio in recent months: 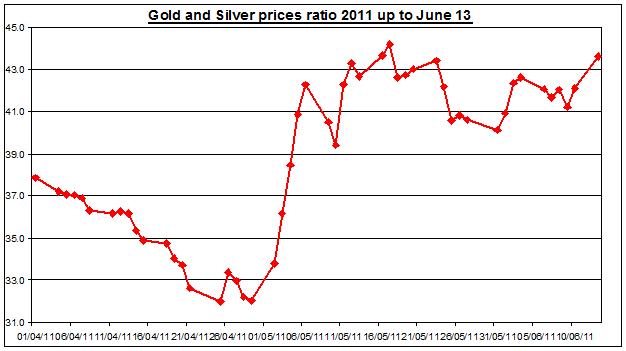 Despite the fluctuations in this ratio, gold and silver prices continue to demonstrate a united front, and their daily percent changes are very much correlated with a 0.753 correlation during June 2011. 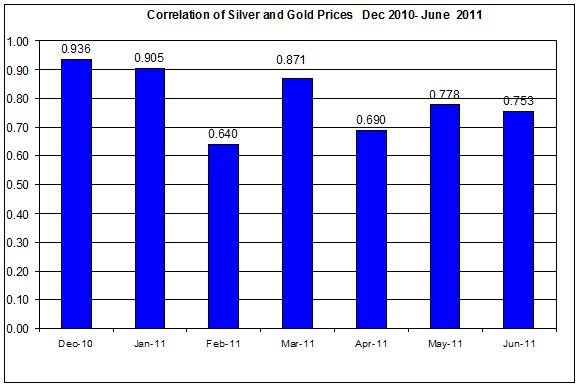 The Bank of Japan board members convened earlier today and stated that the Japanese economy is progressing well in the short term including the steady progress of the manufacturers; however, the BOJ decided to expand the lending program by ¥500 billion (roughly $6.25 billion), after BOJ introduced a lending program of ¥3 trillion (roughly $37.5 billion) for private banks back in June 2010 at 0.1% rates for one year. Up to date, BOJ has already lent ¥2.94 trillion.

Bank of Japan board also decided earlier today to keep the overnight interest rate at the same level of 0%-0.1%.

Japan is among the leading countries in importing gold and silver, and this stimulus plan could help the Japanese economy to further grow and perhaps even raise the demand for precious metals.

Today the US PPI will be published and it shows the changes in the prices of sellers and producers of goods and services. During April this index inclined by 0.8%; if this index will further rise, it might indicate a rising inflation pressures in the U.S.

Does the US defaults on its debt to China?

According to recent news, a Chinese ratings company reported that the U.S. is maybe defaulting on its debt to China in the near future. The main concern comes from the US. Borrowing cap which is at its peak of $14.29 trillion and if Congress won’t raise it by August 2nd, the U.S. won’t be able to lend any further. Not raising the debt ceiling might even cause the US to default on its loans. China – the leading country in holding US government debt – started to cut its holdings on the US debt.

This news might push US dollar down and as a result cause gold and silver prices to gain back some of their value.

The current ratio of gold to silver prices is at 43.64.

Gold and silver prices might have started the week with falls, but these falls aren’t part of a long term trend any might be just a business cycle movement.

The news from Japan, China and US listed above, could contribute to the gains of gold and silver prices as they may push down US dollar.

In the meantime it seems that gold and silver prices will moderately change, but will remain near their current price level.