Gold and silver prices remained unchanged in recent days: during the first couple of weeks of July (1st to 18th of July), gold price rose by 8.08% and silver price inclined by 19.69%; on the other hand, during this week (July 25th to 28th), gold price rose by only 0.11% and silver price declined by 1.4%. This slowdown might continue until the cards will fall on the matter of the debt ceiling talks in the US.  In the mean time the forex and commodities prices don’t move much. Currently, gold and silver prices are trade down. Today, the Euro Area inflation rate will be published, the U.S. advance estimate of second quarter of GDP and Canada’s GDP by industry (update: US GDP grew by 1.3%; see here for more). 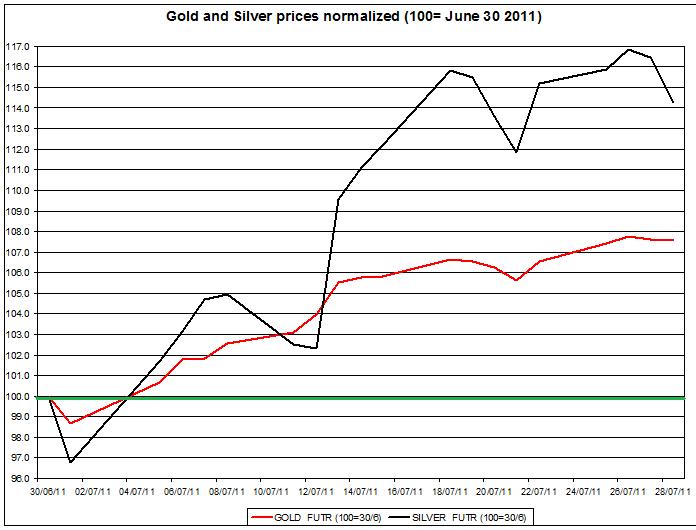 The gold to silver ratio: the ratio between gold and silver prices moderately inclined yesterday, July 28th by 1.9% to 40.61. During July silver price has outperformed gold price as the ratio fell by 5.9%. 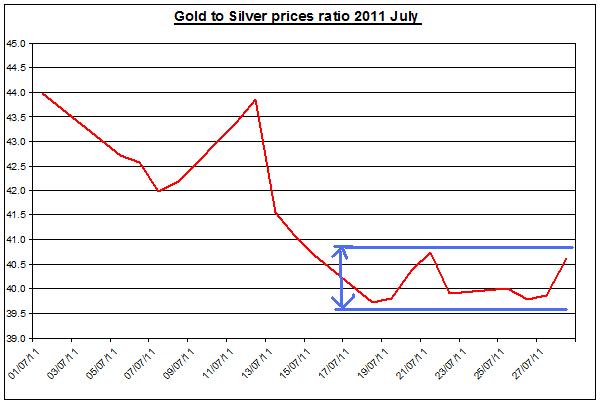 This report regards growth in major industrial sectors for May 2011. In the previous report pertaining April 2011, the real gross domestic product remained unchanged after it had risen by 0.3% during Match 2011. During April 2011, the Manufacturing decreased by 0.7%, but the construction activity edged up by 0.1%. This report could affect the strength of Canadian dollar and consequently major gold and silver prices that are strongly correlated with this exchange rate.

Despite the recent raise in Euro Area interest rate to 1.5% on July 13th; there are still some concerns regarding the inflation in Euro Area, mainly in Germany.  In the last report regarding the inflation rate in June 2011, the annual inflation rate remained at 2.7% for Euro Area. There are expectations that in the upcoming report of July 2011 there will be little change in the CPI. If there will be surprises in this report it could affect the Euro.

US debt ceiling – the debacle continues

Republicans will try to revive their plan to pass a budget deficit cutting bill today, after they had failed to round up enough support to pass it yesterday. The bill was proposed by Speaker of the house Boehner. If this bill will pass, it might move the current stalemate in Washington between Republicans and Democrats over raising the debt ceiling.  On the other hand, President Obama said if the bill will pass he will veto it. The deadline before the US is expected to default on its debt is August 2nd.

Major rating agencies such as Moody’s Investors Service, Standard & Poor’s and Fitch Ratings continue to claim that even if US will reach an agreement on raising the debt ceiling in due time, it doesn’t guarantee they won’t downgrade US’s AAA credit rating.

The precious metals prices are currently traded down in the European market:

The current ratio of gold to silver prices is at 40.95.