Yesterday, gold prices continued to crawl up with a moderate gain; silver prices, on the other hand made its biggest gain this month with a 3.55% increment; this rise was after silver didn’t’ do much for most of the week. What do have planned for today?

Let’s examine the news and events that might affect current gold and silver prices as of April 15th:

Following the G7 meeting from yesterday, today the G20 will convene today.  The G20 comprise of the 20 leading countries such as United States, China, Canada and Japan. In the meeting these countries plan to talk about the economic ramifications of the tsunami disaster in Japan, and the growing debt concerns in several countries such as Britain.

Three is a report that one of the reasons for the rising gold prices is due to the growing concerns among traders and investors for inflations pressures that will devalue the worth of the US dollar. China’s inflation, for example, rose during March to 5.4% compared to 4.9% during February. This rising inflation is partly related to the high oil prices that increased in the past couple of months. Another reason is the rising food prices.

This might explain why investors seek to bet on gold; however it doesn’t explain why silver is outperforming gold. In any case, this hypothesis will be tested in the coming months, if the oil prices will drop and resulting in reduced inflation pressures. If this hypothesis is true then, all things being equal, the gold prices will need to drop and even more precipitately silver prices.

The April rally of precious metals gained a second wind yesterday: As of April 14th, silver price has risen by 10.4%, while gold price increased by 3.0%.

In the chart below are the changes of gold and silver prices during April 2011, normalized to 100=April 1st 2011; the chart shows how silver prices have outperformed gold prices mainly since the end of last week: 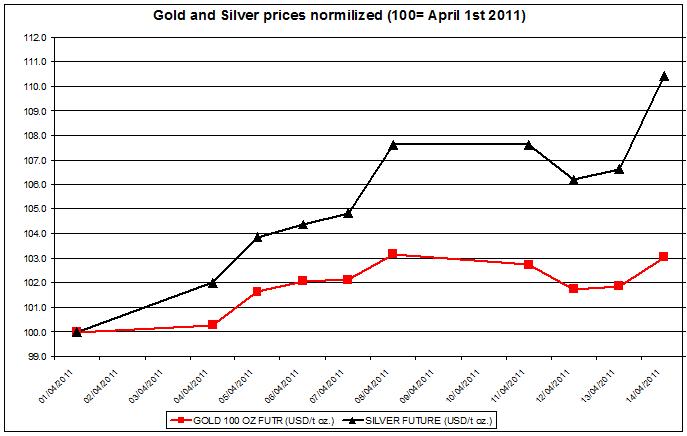 The gold to silver ratio: As of yesterday, April 13th the ratio between gold and silver prices fell and reached a new low of 35.34. 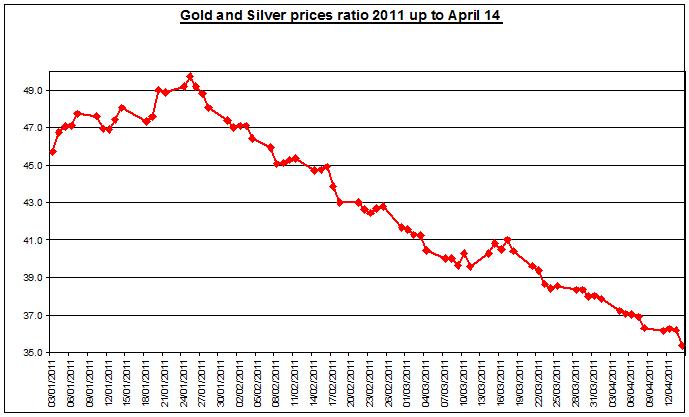 Despite the fact that silver continues to outperform gold prices as seen in the chart above of the ratio between these two data sets, they are still very much correlated: the correlation of gold and silver prices (daily percent changes) is at 0.89 for April (up to date). This means that while gold and silver still move in the same direction, most of the time, silver price is just rising in a higher rate than gold price does. 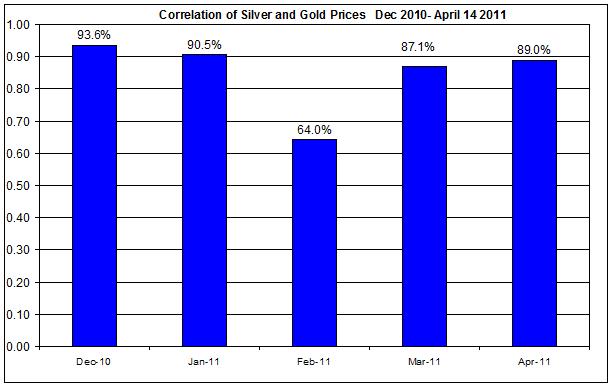 Qaddafi remains adamant in warding off the rebel, as his troops have attacked Misrata, Libya’s third largest city where the rebels reside, as well as near the oil port of Brega.

See here for a more detailed update on Libya and its affect on commodities’ markets.

The current ratio of gold to silver prices is at 35.08.

I speculate that gold prices will continue to moderately increase rise to close the week; silver prices will likely to rise at a higher rate as it did in the past.

All day – Meeting of IMF and World Bank