Gold and silver prices continue to show strength as they currently increase. Ben Bernanke is set to deliver a speech today that might affect the perspective of traders and investors.

Let’s examine the news and events that might affect current gold and silver prices as of April 29th:

Gold and silver prices for April 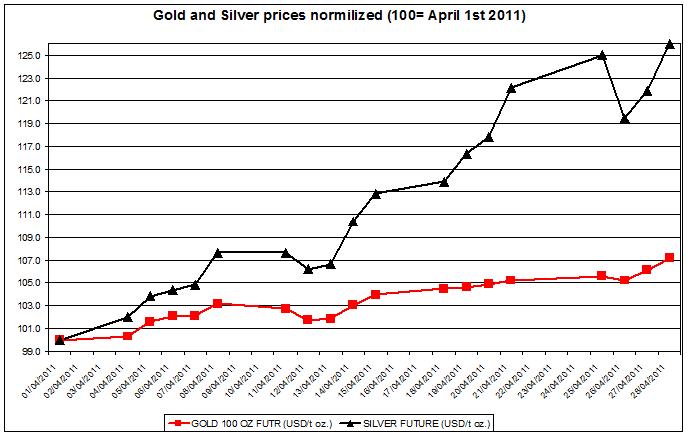 The gold to silver ratio: As of yesterday, April 28th the ratio between gold and silver prices declined to 32.21. The ratio could be interpreted as one troy ounce (31.1 gram) of gold is worth 32.21 troy ounces of silver. 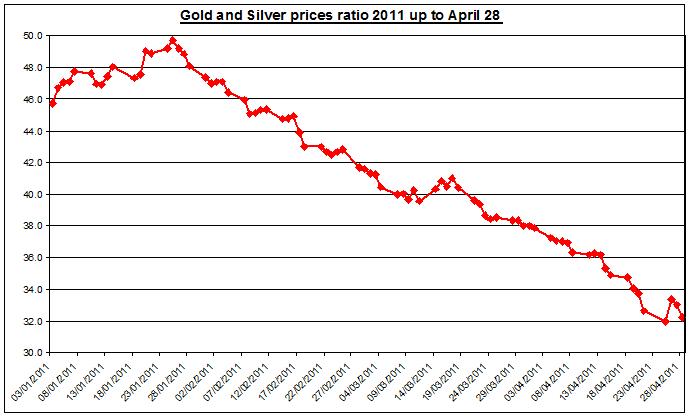 The news from the US in the last few days, which include the S&P rating downgrade of US credit, the very moderate GDP growth rate of only 1.8% during first quarter, and the news that US Federal Reserve will complete its stimulus plan of 600 billion USD bond purchasing by June, and will maintain the current low basic interest rates level (at 0-0.25%) might have rekindled the enthusiasm of traders and inventors to reinvest in gold and silver.

The Fed’s policy is concentrated on pulling the US economy out of its stagnation than worrying over the rising commodities prices due to the weakening of the US dollar.

Ben Bernanke is set to talk today about Community Development in Challenging Times. He will probably also update about the progress of the Fed’s stimulus plan and the recent news of the GDP growth rate in first quarter.

The Euro/USD and the relation with gold

The depreciation of the USD against the EURO continues especially since The ECB had decided to raise its interest  rate for the first time in over two years by 0.25 percent points.  During April the Euro/USD exchange rate rose by 4.12% (up to April 28th). Nonetheless, the US dollar has depreciated against other major currencies such as Japanese Yen (despite the tsunami attack from March) and Australian dollar.

This devalue of US dollar compared to other major currencies isn’t new and is part of a slow downward trend in the recent period.

In regards to the EURO/USD, notice that there is little correlation during April between EURO/USD and gold prices (daily percent changes) as it’s at 0.039 (as seen in the chart below). This finding show that the increase in ECB’s interest rate and the decline in USD compared to EURO doesn’t seem to affect the gold and silver prices so far. 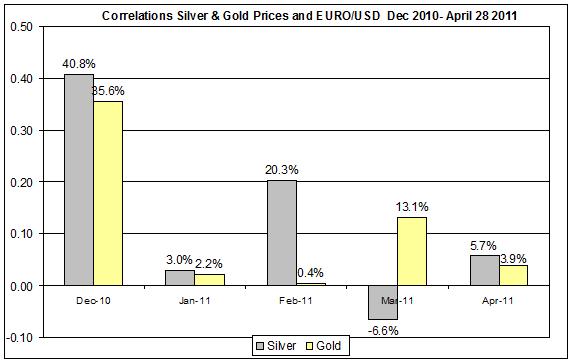 At least 400 people died during the violent confrontations between the Syrian army and civilian protesters against the current regime and current President of Syria Bashar al-Assad, during the last several days.

See here for a more detailed update on Middle East and its effect on commodities’ markets.

The current ratio of gold to silver prices is at 31.60.

Gold and silver Outlook and Analysis:

The current increases in gold and silver prices might be driven by the upcoming speech that Fed chairman Ben Bernanke will give today and the recent news on U.S. economy’s progresses that rekindled the depreciation of the US dollar; the Federal Reserve is set to keep the interest rates low and complete the stimulus plan all of which only keep the US dollar low and consequentially increase major commodities’ prices including gold and silver prices.  After the moderate changes in gold and silver prices at the beginning of the week, the recent hike is probably stimulated by entrance of hot and speculative money to the precious metals markets. This rises, I speculate, are likely to slow down by the end of the week.