Gold and silver prices continue their descent; silver prices are even plummeting very precipitately because of the new margin limitations on silver as announced by CME. The news keep on covering the bin Laden news as this news, from the commodities market perspective, has affected the emotions of many traders.

Let’s see what is up a head in the precious metal market for today, May 3rd:

Gold and silver prices – May

The gold to silver ratio: As of yesterday, May 2nd the ratio between gold and silver prices rose to 33.79. The ratio could be interpreted as one troy ounce (31.1 gram) of gold is worth 33.79 troy ounces of silver. 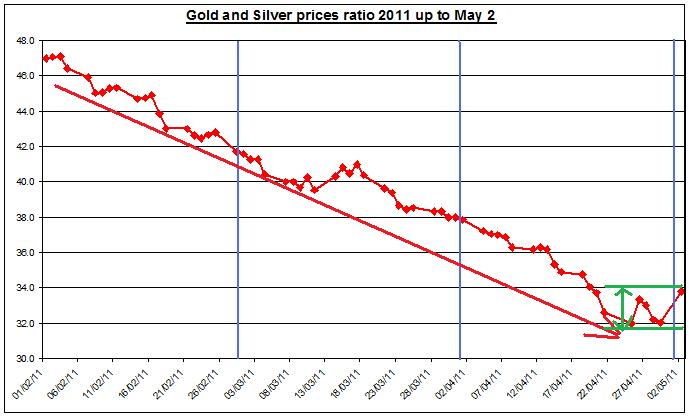 The gold to silver ratio has been stable in the last week as seen in the chart above and ranged between 32 and 34.

Silver Margins rose for second time within a week

CME Group announced that it will raise the margin requirements on silver trading. This announcement comes after CME already announced of a margin increase during last week. Due to the recent announcement, the minimum amount will be needed to deposit will be 16,200$ per contract, an increase of 11.6% from the pervious amount needed.

The margins on Silver contracts rose very rapidly during the year along with the rise in silver prices. Only a year earlier the margin on silver contracts stood at 4,250$ per contract.

This change not only immediately affected silver prices as we currently see them plunge, but also might have some effects in stabilizing this commodity’s price in the long term.

This change affected as seen in the chart above on the gold to silver ratio during last week.

Bin Laden was killed by US forces

The news on the killing of known terrorist and head of al-Qaida – Osama Bin Laden, as reported by US president – Barack Obama will continue to be among the major news items during week.

In regards to major commodities, such as gold and silver, this news might have affected their prices yesterday and today but even if this is the case, I think this effect won’t last long.

If traders and money managers continued to bet on gold during April, this might explain the rising prices in these commodities during that month, even though the supply and demand forces of these commodities aren’t linked as they used to their traded prices.

Following the attack on Gaddafi’s compound by NATO aircrafts, in which Gaddafi’s youngest son and three of his grandsons were killed, the assault of NATO air force is only intensifies.

See here for a more detailed update on Middle East and its effect on commodities’ markets.

The current ratio of gold to silver prices is at 35.26.

This correction in silver price because of the margin increase will probably have a strong lasting effect in the days and weeks to come, however I speculate that traders will continue to bet on silver and gold so these commodities prices might make a comeback but will not increase at the same rates they did during April.