Precious metals prices didn’t do much again during last week as they have each shifted by less than half a percent on a weekly scale. There were several reports that were published during the week but none of them seem to have a major impact on precious metals. The Philly Fed Index rose from the previous month but was still negative, i.e. the manufacturing conditions haven’t improved; U.S housing starts declined during July, this report tends to be negatively linked with bullion prices; The American core CPI edged up by 0.1% during July, while the U.S PPI excluding food and energy rose by 0.4%; Euro Area GDP contracted by 0.2% during Q2 2012; U.S retail sales rose by 0.8% during July, and finally U.S. jobless claims rose last week by 2k to 366k.

During the week the Euro/USD rose by 0.37%; on the other hand, other “risk currencies” depreciated against the USD such as the Aussie dollar by 1.49%. This mixed trend may have contributed to the little movement of gold and silver.

Here is a short recap of the changes in Bullion between August 13th and August 17th:

During last week, the average daily percent change of gold reached -0.04%; silver edged up by an average 0.02%.

As seen below, the chart presents the changes of precious metals, as their rates normalized to 100 to August 10th. Bullion prices edged up during most of the week. 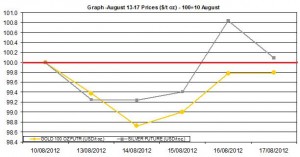 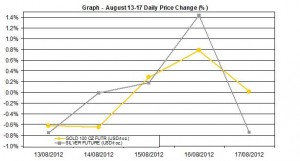