Precious metals prices resumed their rally and hiked during most of the week especially on the last day of the week, following the publications of the U.S labor report, in which only 96k jobs were added – many anticipated the number will be around 120k. This news may have contributed to the renewed expectations of recent weeks that another quantitative easing plan might be announced by the FOMC next week in the upcoming FOMC meeting. Despite the recent rise of precious metals prices, I still think it’s too early to expect another QE program. There were several other reports that were published during last week, such as U.S manufacturing PMI that may have had a modest impact on precious metals. ECB left rate unchanged at 0.75% but ECB did introduce its bond purchase plan that is waiting for the final approval of Germany and Spain next week.

During the week the Euro/USD also rose by 1.9%; further, other “risk currencies” also appreciated against the USD, e.g the Aussie dollar by 0.61%. Thus, the rally of Euro seems to have contributed to the recovery of precious metals rates.

Here is a short recap of the changes in Bullion between September 3rd and September 7th:

During last week, the average daily percent change of gold reached 0.62%; silver rose by an average 1.4%.

As seen below, the chart presents the changes of precious metals, as their rates normalized to 100 to August 31st. Bullion prices changed direction during the week as they rose during most of the week. 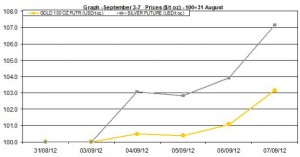 The second chart shows the daily percent developments of precious metals (or in other words the changes around the trend). Silver and gold hiked on Friday following the U.S non-farm payroll report that raised the expectations of the many bullion traders that another QE program could become a reality in the near future. During last week precious metals daily percent changes ranged between nearly 3.1% gain and -0.25% loss. 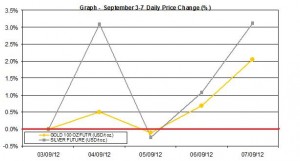