Precious metals prices hiked on the last day of the week, following Ben Bernanke speech that raised expectations of many precious metals traders that another quantitative easing plan might be announced by the FOMC in the near future. Despite the recent rally of bullion prices, I still think it’s too early to expect another QE program. There were several other reports that were published during the week, such as the pending home sales figures in the U.S, and the revised up U.S GDP for Q2 that many have had a modest impact on precious metals.

During the week the Euro/USD rose by 0.53%; on the other hand, other “risk currencies” depreciated against the USD such as the Aussie dollar by 0.8%. Nonetheless, the rally of Euro seems to have contributed to the rally of bullion rates.

Here is a short recap of the changes in Bullion between August 27th and August 31st:

During last week, the average daily percent change of gold reached -0.18%; silver rose by an average 0.49%.

As seen below, the chart shows the changes of precious metals, as their rates normalized to 100 to August 24th. Bullion prices changed direction during the week as they rose on the first and last day of the week; they declined during the rest of the week. 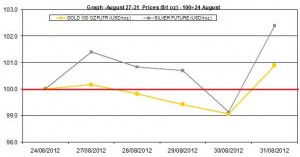 The second chart presents the daily percent shifts of precious metals (or in other words the changes around the trend). Silver and gold hiked on Friday following the speech of Chairman of the Fed, Ben Bernanke who raised the expectations of the many bullion traders that another QE program is right around the corner. During last week precious metals daily percent changes ranged between nearly 3.5% gain and 1.5% loss. 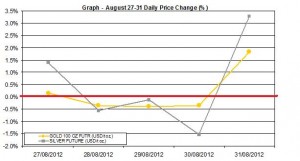