Precious metals resumed their slow descent during the week after they had rallied in the previous week. Despite the hopes of many that Bernanke will hint of stimulus plan in the near future, he didn’t comply and in his testimonies at the Hill he didn’t offer any information about the future steps of the FOMC.  During the week there were several U.S reports that presented a mixed signal as to the economic progress of the U.S: U.S housing starts rose during June, while existing home sales declined by 5.4%; Philly Fed index remained negative but slightly rose, while retail sales edged down. Other U.S related news and reports include: jobless claims rose to 386k; U.S CPI remained flat while core CPI rose by 0.2%.

Finally, during the week the Euro/USD edged down and may have curbed the rally of major commodities rates including gold, silver and oil.

Here is a short recap of the changes in Bullion between July 16th and July 20th:

The chart below presents the developments of precious metals, as their rates were normalized to 100 to July 13th. Bullion prices didn’t do much during the week and declined during the first half of the week; by the last couple of days, bullion rates edged up. 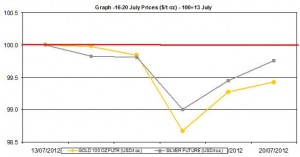 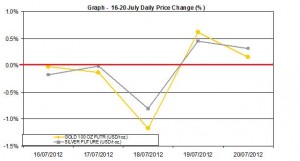