Precious metals prices took a dive on Thursday and thus erased their gains from the first weeks of June. The FOMC decision to extend operation twist throughout the rest of the year by another $267 billion wasn’t what many bullion traders had hoped. This means that without another quantitative easing program bullion rates aren’t going anywhere. Several other U.S related reports came out during the week and showed the U.S economy isn’t progressing: Philly Fed index declined in June to its lowest level this year; existing home sales had an upward trend during last week. U.S jobless claims didn’t change much and declined by only 2k last week. The Euro and Aussie dollar slightly depreciated against the USD during last week. This may have also pulled down a bit bullion rates.

Here is a short recap of the changes in Bullion between June 18th and June 22nd:

During last week, the average daily percent change of gold decreased by 0.76%; silver also fell by an average 1.42%.

The chart below shows the changes of precious metals, as their rates were normalized to 100 to June 15th. Bullion prices have had a sharp fall mainly during the second part of the week. 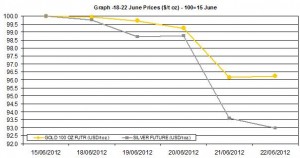 The second chart presents the daily percent shifts of precious metals (or in other words the shifts around the trend). Bullion prices didn’t do much during the first three days of the week; their sharpest fall was on Thursday after the FOMC decision that came on Wednesday. During that day, gold fell by over 3% and silver by almost 5.5%. Their daily percent changes ranged between nearly 0.09% gain and 5.5% loss. 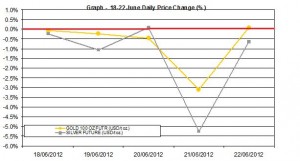