Last week, the premium of Brent over WTI dropped to its lowest level in months. This recent fall is part of a downward trend that could have a negative effect on oil refineries including Valero Energy (NYSE:VLO) and Marathon Petroleum (NYSE:MPC). Let’s take a closer look at the relation between the spread between Brent and WTI and the impact it has on these companies’ profit margin. Also, let’s consider these changes in light of the progress of the prices of oil (WTI and Brent).

Despite the recent recovery of the oil market, the spread between Brent and WTI narrowed to single digit territory. The chart below shows the progress of the premium of Brent over WTI during the year (up to date). 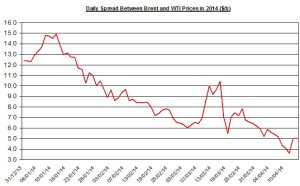 As you can see, the premium fell from around $15 at the beginning of the year to around $5 as of last week. Moreover, the average quarterly (first quarter) premium was around $9 — nearly $9 below the average recorded in the same quarter a year back. This lower premium cut down oil refineries’ profitability in the first quarter. Let’s see how.

The chart below presents the changes in the quarterly gross profit margin of Valero Energy and Marathon Petroleum and the average quarterly premium of Brent over WTI. 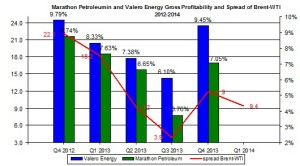 The chart shows the relation between the profitability of these companies and the shifts in the Brent-WTI premium. As of the fourth quarter of 2013, the average premium was nearly $12 — the highest level since the first quarter of 2013. This higher premium improved these companies’ profitability. Their revenue also grew during that quarter. Therefore, the modest decline in the premium reduced their profitability during the first quarter.

But the premium isn’t the only factor worth considering; the base price of oil (WTI) is also a factor. The average price of oil (WTI) was $97.6 in the fourth quarter of 2013 — nearly 10% higher than the same quarter in 2012.  The higher price of oil also contributed to the rise in revenue and profitability during that quarter.

Based on the above, Valero Energy and Marathon Petroleum’s first quarter reports are likely to show a modest decline in their profitability.

Finally, the recent harsh winter conditions could have reduced the throughput of Valero Energy and Marathon Petroleum in the past quarter. Nonetheless, both companies expect to increase their capital expenditure this year — a signal for a potential rise in throughput. Valero Energy will increase its capex by nearly 9%; Marathon Petroleum’s midstream and retail capital expenditures alone are projected to rise by over 130% over the next three years.

Despite the weather concerns, according to the U.S Energy Information Administration, crude oil refinery input reached an average of 15.41 million barrels per day in the first quarter of 2014, which was 5.6% higher than average during the first quarter of 2013. But the weather may have still had a negative effect on these companies’ operations, which could result in lower than expected throughput for Valero Energy and Marathon Petroleum.

← Will Chesapeake Reach its First Quarter Goals?
Gold And Silver | Recap for April 14-18 →