Chesapeake Energy Corporation (NYSE: CHK) rallied in the past few weeks. The recent steps the company took such as selling Chesapeake Midstream Partners, L.P may have contributed to its rally. It seems the company is headed towards scaling down its natural gas operations. This could mean the recent rally in natural gas prices and by extension United States Natural Gas (NYSEMKT: UNG) might not help the company to recover. Is the recent path the company took a good one? Let’s examine the recent Macro changes and news that could explain what is up ahead for Chesapeake.

The company sold one of its subsidiary companies Chesapeake Midstream Partners, L.P. (NYSE:CHKM) for $2 billion to Global Infrastructure Partners (GIP). The company stated this sale results in a $1 billion pretax gain. This sale will likely to be the first among many to follow because the company still has to compensate for its financial deficit. More important, if the company will continue at this path of selling natural gas companies and operations, this could mean Chesapeake will eventually  lose its title as  the second largest natural gas producer of natural gas, and be less affected by the changes in natural gas prices.

Chesapeake will publish its financial results for Q2 2012 by August 6, 2012. I suspect it might reflect a decline in the company’s natural gas operations. In the short term, the scale down in natural gas operations seems to gain the confidence of investors but I’m not sure this change in direction will be good in the long run: natural gas usage is rising in the U.S and cutting off a growing industry might not be a good thing for the company. On the other hand, since Chesapeake is still in a financial hole, it doesn’t seem to have much of a choice but to cut off its less profitable operations.

During recent weeks the prices of oil shifted very promptly. The result of these sharp shifts was that oil prices rose by 5% during July and by extension United States Oil (NYSEMKT:USO) also increased by a similar rate.

If the company will continue at its current direction in which it sells natural gas related operations, this could weaken the correlation the company’s stock and financials have with natural gas prices and at the same time could further tighten the relation with oil prices. 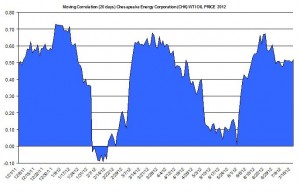 If oil prices will remain high and perhaps even further rise, this could also help the company’s profit margins and consequently may reflect the stock price.

The S&P500 on the other hand didn’t do much during July as it edged up by 0.8%.  The concerns over the progress of the U.S, China and Europe may have slowed down the rally of the stock prices and consequently may have also curbed the recovery of Chesapeake’s stock. The linear between the stock price and S&P500 daily percent reached 0.74 (during June/July). This means that nearly 55% of Chesapeake’s volatility could be explained by the changes in S&P500.

All these correlations point out to one thing: despite the recent rally in the company’s stock, the changes in stocks and oil prices may have had a large role in Chesapeake’s recent movement.

The recent changes in Chesapeake might be good for the company in the short term as it could lead the company out of its financial hole, but it is not clear if the scale down in the company’s natural gas operations will be proven to be a good bet in the long run since NG is a growing industry in the U.S. The silver lining is that if natural gas prices will remain low, the profitability of this industry might decline.

For further Reading: Is Exxon Due for a Rally?